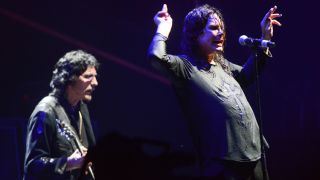 Black Sabbath have decided to call their forthcoming album 13. The band's first studio record to feature singer Ozzy Osbourne since 1978's Never Say Die, 13 will be released in June (an exact date is yet to be determined).

It is not known whether Wilk will play with the band on tour - for the 13 sessions, he took the place of Sabbath founding member Bill Ward, who initially signed on for the reunion album and tour but bailed after a contract dispute.

That hasn't been the only hitch in Black Sabbath's reunion plans: last January, Iommi announced that he was being treated for lymphoma. He has undergone chemotherapy, and throughout the recording of the new album has issued positive health updates for fans.

Ahead of the release of 13, Black Sabbath will play a string of shows, listed below: