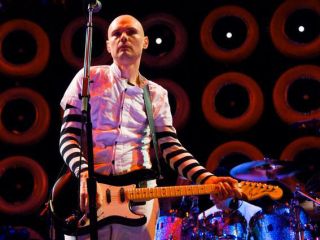 Billy Corgan IS The Smashing Pumpkins. And don't you forget it! (Image credit: Scott McDermott/Corbis)

Billy Corgan is defending his decision to keep performing under the name The Smashing Pumpkins in a lengthy post on his website.

Despite the fact that he is now the sole member of the original group, following the departure earlier this year by drummer Jimmy Chamberlin, Corgan says he is "100pct committed to the future of SP. I can tell you that. 100pct!! I've never been happier about being in SP, or a part of SP, than I am now."

References the King Of Pop

Alluding to the recent death of Michael Jackson, Corgan says, "We've all seen over the past 2 weeks what happens when a man loses touch with his hope, his spirit, and his music. The path I am on is one of feeling reborn by my love for my music. I wasn't really deep down sure I could get back here, but I am here."

In conclusion, Corgan writes, I will never say to you what people say to me all the time, which is that 'I am the band'. I am not 'the band,'I am just the leader of the band. I only want people around me who respect me and my music.

"There is a lot of discomfort as we watch our world change quite quickly before our eyes. Familiarity breeds a sort of security, but it also breeds contempt. If you know anything about me, you should know you won't catch me. Smashing Pumpkins is not a concept 'over there' anymore. Its where it has always been. Right HERE.

O-kayyy. So Billy's right HERE. Or right there. In any case, how about making some music? Some really good Smashing Pumpkins music? Get it? Got it? Good. MR.

To read Billy Corgan's statement in its entirety, click here.