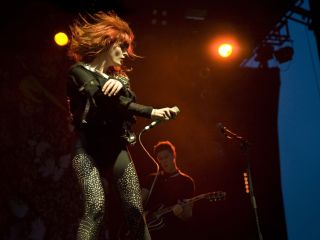 Paul Epworth has been named producer of the year at the Music Producers' Guild Awards, which means that he also receives the Brit Award for best producer.

Epworth, whose previous credits include production work for the likes of Bloc Party, Plan B, Kate Nash, Primal Scream and Friendly Fires, seemingly won the award on the strength of his co-production of Florence and the Machine's debut album Lungs.

The band's lead singer Florence Welch was on hand at the Music Producers' Guild Awards in London last night to present Epworth with his two prizes.

On receiving these, Epworth said: "I wouldn't be here without the freedom that the digital revolution has given me creatively. But also I know I'm lucky to have had that old tuition from people who worked with The Beatles, The Doors, The Beach Boys."