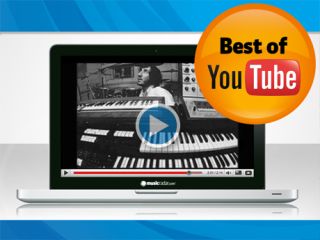 Fleet fingers on the Akai APC40

This video of mrbeefwellington jamming on an Akai APC40/Ableton Live setup has provoked some debate. Is he displaying genuine skill, or just randomly triggering a load of clips? It's probably a bit of both, but certainly entertaining enough to be worth a couple of minutes of your time. Ben Rogerson

Who wants to hear some thrash harp-metal? Introducing Harptallica: an all-harp tribute to Metallica. (Hmm, I see what they've done with the name.) Chris Wickett

You may know MPC stands for 'music production centre', i.e - it's a tool for producers. However, something was clearly lost in translation for French DJ crew Dirtyphonics, they use the beat machine to play live… Banging out breaks and jump-up synth lines on the pads isn't the only aspect of their show though: Alongside the MPC 2500 and MPC 1000 they've got two CD decks, two turntables, and a Korg Kaosillator along with other various mixers and effects (I'm pretty sure that's a 1st gen Nintendo Gameboy at 2:06 as well). Bask in the hi-def glory of Youtube's HQ option if you can, and enjoy the legion of Francophone ravers bouncing to Dirtyphonic's blend of drum 'n' bass, dubstep and electro. Jon Sherrard

Performing a bona fide classic is always risky. No matter what, everybody will always say, "Yeah, but the original's better." And while The Beatles' recording and The Dirty Mac's rendition are unbeatable the late, great Healey and his band did real justice to Lennon's howling blues. Check out the way they throttle the third and fourth verses. Healey, of course, shines on lead guitar. Some fine slide work too. Joe Bosso

Steve Scott is a London based animation director and illustrator - he was asked to produce the animation for Led Zeppelin's Ahment Ertegun Tribute Concert at the O2 in 2007. Above are the live visuals for Kashmir - "imagine this 28 meters wide!!!" (Via: BoingBoing) Tom Porter