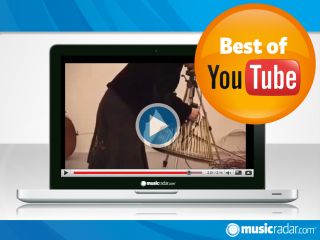 Featured in this week's bunch of clips is an introduction to the waterphone: an instrument so awesome that MusicRadar is seriously considering adding a 'Waterphones' tab to accompany the 'Guitars', 'Tech' and 'Drums' ones at the top of this page. Seriously.

The pulsing organ from The Who's Won't Get Fooled Again is one of rock's genuinely iconic sounds. In this clip, Pete Townshend explains how he created it using the filter from an EMS VCS 3. As Townshend says, the technique turned a relatively simple set of chords into something utterly beguiling. (Via Synthtopia) Ben Rogerson

You can do a hell of a lot with a great delay pedal. Conte's videosong rules are as follows: What you see is what you hear (no lip-syncing for instruments or voice), and if you hear it, at some point you see it. There are no hidden sounds. Go here for more on the new Electro-Harmonix Deluxe Memory Man. Chris Vinnicombe

Back in April, Engine-EarZ headed to the famous Maida Vale studios for a BBC Introducing sesh. The Reading-based dubsteppers dropped four tracks, including collaborations with Foreign Beggars and drum 'n' bass songstress Jenna G. Here's the first offering from the session: including tabla, guitar and Nathan 'Flutebox' Lee. If you need your trad-asian-dubstep fix live, you can get it at the Glastonbury festival on the 6Music or Bassline Circus stages, 24 - 28 June. Jon Sherrard

Next page: James Brown, Kanye West, and The Waterphone

If the remarkable The Night James Brown Saved Boston showed how culturally and politically vital the Godfather of Soul was in the late '60s, this clip shows just how bloody sexy he was. Here he is in a rare clip from Playboy After Dark, minus the cape draping, minus the JBs, minus the good foot. Just James Brown completely solo, taut, twitching, boxer lean, funky as hell and with possibly the sharpest haircut I have EVER seen. At no point did this man go home alone. Mike Goldsmith

Kanye West - Spaceship (when we were young)

Kanye West is pretty hard to relate to these days, UNLESS YOU TOO HAVE A STICKY CAPS LOCK. So let this previously unreleased video for College Dropout track Spaceman serve as a reminder than Kanye was once a struggling rapper, locked in a basement recording by night, working for The Man in a clothes shop by day. Extra points if you can spot the Marvin Gaye sample… (Via: Videogum) Tom Porter

What happens if you get a waterphone (a whalesong-like bowed instrument), record it being played in the reverb chamber of the National Physics Laboratory - and then play the video backwards? It's a truly epic yet terrifying sound, and it's brought to you by Sarah Angliss (aka SpaceDog) whose past exhibits have explored subjects such as "infrasonic music, category 4 diseases, cyborgs, extreme reverb, the uncanny valley, genetic privacy, evolutionary music, dogs in space, hurdy gurdies" and more. Chris Wickett