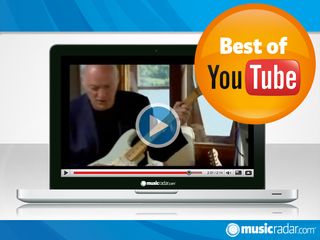 David Gilmour with his 1954 strat

This week, we're revealing the great secrets of the music world: David Gilmour reveals how exactly he's able to string-bend like he does (it's simpler than you'd think) and Bootsy Collins lets us in on the secret of funk (there's more to it than just an oversized slapping-thumb). Enjoy!

Adam Stephens, one half of San Francisco alt-folk duo Two Gallants, is my favourite contemporary songwriter. In this clip, he showcases material from a forthcoming solo project. Here, his frayed melancholy is framed by more extensive instrumentation in the shape of a full backing band. Check out more songs here. Chris Vinnicombe

As mediawatchers out there will know, ITV has decided to axe flagship arts programme The South Bank Show after presenter Melvyn Bragg steps down this summer. Next week, MusicRadar will be running a special feature featuring some of the show's greatest music clips (and there are bloody loads - Sonic Youth, Iggy, Macca, The Who, Stevie Wonder, Nick Cave) but until then, enjoy this VHS-quality-but-AMAZING treat from Lenny Henry's Lenny Hunts The Funk special from 1992. Respect the Melv (and the Lenny), say we. Mike Goldsmith

"Just push. The wire gets tigher, the pitch goes up." So that's how he does it! Who'd have thought it was that easy? Certainly not this MusicRadar writer, who's tried on multiple occasions to get anywhere near Mr Gilmour's level of string-bending accuracy, only to be left with very sore fingertips and a lost two hours spent constantly saying "nearly!". Ah well, practise makes perfect - although I can't help the feeling that a 1954 Stratocaster - like David's - would help... Chris Wickett

Several weeks ago, we showed you The Seeds making a bizarre appearance on a '60s sitcom. Now check out the late, great Harry Nilsson on The Ghost & Mrs Muir in 1969. Nilsson plays a songwriter staying at the cottage inn run by Hope Lange's character, and during this episode he shows both his gentle and absurd sides. (By the way, Nilsson was a notoriously shy performer. Of his guest shot on the show he said, "It was awful!") Joe Bosso

With all the hype surrounding Little Boots at the start of the year, I'd almost forgotten that she hasn't actually released an album yet. That won't be with us until June, but we do have the first single from it (released on 25 May), plus the accompanying video. New In Town retains the electro stylings that typified Little Boots' demo material, but ramps up the pop friendliness via a hooky chorus. Ben Rogerson