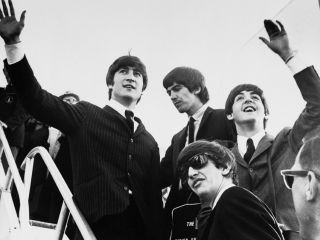 Does The Pope like Tomorrow Never Knows over Eleanor Rigby? (Image credit: Bettmann/CORBIS)

Works by The Beatles, Pink Floyd, U2, Oasis, among others, have made the all-time top 10 list of pop and rock albums by the Vatican newspaper L'Osservatore Romano.

Which leads us to ask one thing: If The Beatles aren't bigger than Jesus, does this mean they're pretty close?

In an editorial which called called the albums "perfect for anyone marooned on a desert island," the paper said that "a little handbook of musical resistance could be useful during this time of the year in which, in addition to having put up with the rigours of winter, we have to endure a rising tide of musical festivals.

"So as not to be totally overwhelmed, and to remember that an alternative exists, our modest guide can point you on the road to good music."

The newspaper admitted that identifying the 10 best albums in the history of pop music was not "easy" and inevitably the choice might seem "partial."

While we can't fault most of the selections, the addition of David Crosby's If I Could Only Remember My Name prompts us to ask, "Huh?" (No, let's not start the jokes about 'What is The Pope smoking?')

The Vatican's Top 10 (in order of release)

So what do you think? Did the Vatican get it right? Tell us on our Facebook page.

Liked this? Now try: 10 best acoustic guitars under £300 and The best music-making apps on the iPhone