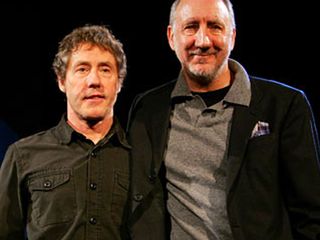 This Saturday The Who will play a 40-minute set at the VH1 Rock Honors - where their music will be venerated by fans such as Pearl Jam, Foo Fighters and The Flaming Lips - but after that, who knows what they'll be doing?

Beyond four Japanese dates in November, there was to be a album project of R&B covers, but now Pete Townshend has put the kibosh on the record - and he isn't giving much indication that it, or any other recording, will ever happen.

"I must not commit to studio time or show dates, especially not to long tours, without some kind of creative programme," Townshend wrote on his blog in April. "I don't know whether I can write songs for The Who. I don't know if I can come up with some idea, some story, some angle, that will make me feel good about being the writer for The Who. Most important of all, I don't know if I write something whether I should try to force The Who to carry it."

Writing on one of The Who's fan forums, Townshend was even more blunt: "I am no longer a member of a band called The Who. I am Pete Townshend. I used to be in a band called The Who. It does not exist today except in your dreams. I am a songwriter and guitarist who - if I create the right setting - can walk onto a stage with my old buddy Roger Daltrey and evoke the old magic of the Who in the dreams of the audience...

"There are many Who fans who have just as good a time watching one of the many fantastic Who tribute bands as watching Roger and Pete (and their supporting musicians) pretend to be who we used to be."

Roger Daltrey, while not as dismissive as Townshend, shares the guitarist's conflicts about a new Who album." I think we've done enough already." he says. "It would be great to have something new, but it doesn't really matter."

Daltrey is more enthused about performing the group's catalog on the road, and he has no problem with becoming a touring jukebox. "No one plays our music better than us," he says. "I would like to do Quadrophenia again.I think that tour was way ahead of its time when we did it back in 1996. There's so much we can do, but the road does wear you down."

But sitting on the couch can be just as grueling. And nothing feeds the soul like smashing a guitar or two.