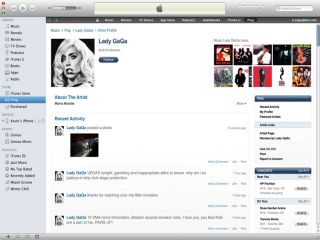 Yesterday's Apple event has been and gone and, as expected, consumers have been blessed with a trio of new iPods; a revised Apple TV; and an iTunes update complete with social networking feature (not expected).

Here's our guide to the essential bits:

As well as a new logo, iTunes 10 sees Apple taking on social networking with a new feature called Ping, described by Steve jobs as "Facebook and Twitter meets iTunes".

In a nutshell, Ping is a tool for compiling and sharing playlists with others in your Ping network. You can create a profile, follow your favourite artists for updates and track your friends' downloads. Naturally, it's all transferable to iPhone and iPod touch running iOS 4.

It's interesting to note that Apple's official press release attempts to shake off iTunes' shopfront image by referring to it as "the number one music community in the world, with over 160 million iTunes users in 23 countries." So, while the likes of Lastfm do this kind of thing very well already, you can't argue with those figures and the possibilities for domination they hold.

However, after ten minutes of Ping we're not exactly blown away. As far as we can tell those promised playlists aren't actually playable - they're merely shop links. It's also not clear how musician's can set up their own artist pages.

"Retina display, FaceTime video calling, HD video recording, Apple's A4 chip, 3-axis gyro, iOS 4.1 and Game Center - all combined in the thinnest and lightest iPod touch ever. The new iPod touch features up to 40 hours of music playback and seven hours of video playback on a single battery charge."

By Steve Jobs' own admission, the iPod touch 4G is essentially 'an iPhone 4 minus the phone and SMS functions'. So we could just refer you to iPhone 4 and music-making: what's changed? for a musicians' perspective of the new features. Or check out TechRadar's super early iPod touch 4G hands-on review.

While Apple's miniature players offer little more than listening pleasure to the portable musician, 2010's updates are worthy of a paragraph at least.

The ever-changing nano is almost half as small and half as light as its predecessor making it far closer in size to its minute shuffle sibling (it even comes with a clip). It does, however, score points off the touch by boasting its own multitouch interface and impressive (if true) 24 hours of music playback battery life.

The new shuffle sees a return to the clickable ring control with up to 15 hours of battery life.

Last but not least, Chris Martin got his geek on by taking to the stage to debut a new "Coldplay version 2.6" track, Wedding Bells. Cool Flaming Lips T-shirt, though…