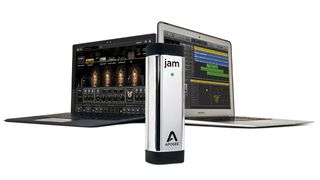 Apogee Electronics has announced that its diminutive audio interface, the Jam 96k, is now compatible with Windows 10 computers.

Apogee's Director of Marketing, Sean McArthur had this to say on the new product in the JAM range.

"The original JAM was launched in 2011 and was wildly successful. It put incredible, portable sound quality in the hands of guitar players and empowered them with the simplest way to record on their iPhone or Mac," commented McArthur.

"We are excited to offer these high-performance products to Windows customers," he continued. "In August, 2016, we introduced MiC 96k for Windows and Mac. And now, with the new JAM 96k, Windows based musicians from beginner to pro can experience Apogee quality with two great portable tools for making music."

The JAM 96k will be available this month priced at £105 RRP. For more information, check out the Apogee Electronics website.