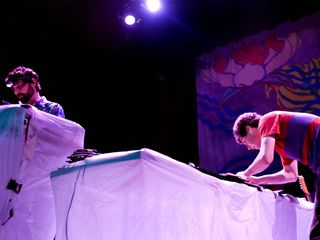 Residing in the indie populace for the better part of a decade, Animal Collective finally broke through last year with their critically-acclaimed record Merriweather Post Pavilion, which beautifully blended a collage of sampled sounds with classic songwriting.

The band's projects feature contributions from David Portner (AKA Avey Tare), Noah Lennox (Panda Bear), Brian Weitz (Geologist) and Josh Dibb (Deakin), and Future Music caught up with David, Noah and Brian to find out how they operate.

How did you start making music together?

David Portner: "Brian [Weitz] and I had a band and we asked Josh [Dibb] to join us. We'd just pick different styles that we really like and think 'let's record a song like this'."

What were you using to record at the time?

DP: "I had a Tascam 48 half-inch reel-to-reel which I still use now actually, it's an awesome machine. Josh had an eight-track ADAT and Noah and Josh soundproofed a room at Josh's mom's house. We didn't really have good mics, just SM57s that we used for everything."

Brian Weitz: "And with the soundproofing, we didn't really know what we were doing either. You'd just walk in and it'd literally be a dead sound. You couldn't really record anything in there. We still use it now though for practicing sometimes."

DP: "After that, Brian and I both went to New York for college, and we talked a lot about stuff that we wanted to do. Sometimes we'd do some music concréte shows. Noah and I would keep writing emails about what we wanted to do, musically, and I think that's when we got the idea that we wanted to start our own label. We used to record everything on a MiniDisc player with a Sony ECM mic."

What was the set-up for those recordings?

BW: "It didn't really matter that much - it was often just one mic in the middle of the room."

DP: "We had a Yamaha DX27, some acoustic guitars and a lot of plates."

DP: "For us, the gear isn't that important. We just look for things that are easy for us to use and express our personalities through and that don't take a long time to figure out and that you can use organically. We took it from there to the live setting, as we didn't really wanna use a computer on stage."

DP: "Growing up, going to see shows - I mean there are plenty of people who do it well and it's cool for a certain type of music - but for us and for our music we just didn't want to rely on a computer to generate sequences on stage."

BW: "We're still playing our samplers like they're live instruments. Even the most interactive software for live performance still don't seem quick enough to organically interact with the energy of the crowd. If there's any reason that the music needs to change suddenly because of the lights or whatever, the laptop still isn't quick enough."

How does the show work now?

DP: "We use samplers - I have a digital eight-track, a bunch of effects, guitar, some keyboards. Nothing is synced. There's usually a consistent rhythmic element that plays through one song and we all play to that. We monitor ourselves on Mackies and it allows us to have a full spectrum of sound behind us so we feel like we're in the world of the song."

So you take parts from the tracks and replay them through the sampler?

BW: "Well, it wasn't like we recorded the songs in the studio and then sampled the recordings in order to play it live - it's the opposite. We wrote the songs with the idea that we would perform them with samplers live onstage well before we got to the recording studio, so we figured out what the little samples were gonna be in our practice space."

Noah Lennox: "We'd set up a couple of mics and record drums and set that up as a loop and start affecting that as the song progressed. It's all little pieces put together like that."

BW: "And that's how we made the record as well. There had been a few overdubs since then, like a live piano that was done in the studio that we wanted to use in the live show. All the samples were created before the recording."

In terms of production, how involved are you in the process?

DP: "We're very involved. A lot of the sounds are pretty much set before we go in [to the studio]. In the past, all we wanted the studio for was to capture the songs and the vibe we already had, and we didn't need any additional production. This time though [on Merriweather Post Pavilion] , there was a little bit more production happening when we were in the studio. There were a couple of things that we were able to come up with because of what they had there too - cool ways to mic and layer drums, which wasn't anything we had planned before we went in there. We usually have an engineer that handles the desk."

DP: "We recorded it in Oxford, Mississippi at a studio called Sweet Tea. They had a great hallway that we recorded a lot of the drums and stuff in."

NL: "They had this huge metal wall that was in like a storage area and it sounded cool. A lot of the reverb on the album is actually from that hallway, especially on the percussion."

BW: "The owner wasn't there while we were recording but I heard that it was the last project and I wrote him an email. He'd never thought to record anything in that hallway so I told him to sample it up as an impulse response before they left."

DP: "We wanted to put a lot more space on this record as we felt that Strawberry Jam, our last record, was a little cluttered and it was much harder to mix. We really planned out the sonic spectrum this time around and it made it easy for Ben too, as everything had its place."

What's the songwriting process then, if you're working from small samples?

DP: "Noah and I kind of start with a melody. For this record we just recorded some demos and sent them to Brian. We try to keep it as simple as possible because we know there's gonna be a lot more added. Then we get together for like two weeks and we all prepare material for it and we play it until everyone is comfortable with how it sounds. For this record it came together really fast actually - we got nine songs done in two weeks."

NL: "Yeah and then we'll play the songs on tour for a little bit and record the live version and then there'll be another stage where we overdub things."

BW: "We usually just record our live performances of the songs but this time, most of the record was actually overdubs. When we told Ben he said you just can't record like a live band playing a live performance if you want to get the separation we wanted. I was a bit wary at first about the energy not being there if we did all overdubs, but we gave it a go for one track and it sounded so good that I was comfortable with it then."