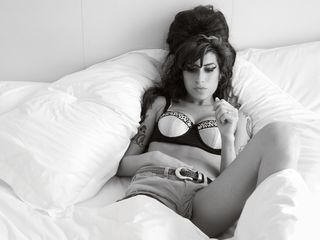 It's only taken four years, but it finally appears as though Amy Winehouse is serious about making some more music. According to reports, the much-troubled Rehab singer has reunited with producer Mark Ronson (who helmed her smash Back To Black album) at a studio that Winehouse has purchased.

Oh, and she's even given her new workplace a zippy (and strangely appropriate) name: The Slammer. The studio, you see, is opposite Pentonville Prison in North London. Pentonville Prison was the one-time residence of Babyshambles frontman Pete Doherty, who has been known to share Winehouse's penchant for excessive living.

How far Winehouse and Ronson are into the project isn't known, but The Sun quotes Ronson as stating, "There'll be something to hear quite soon. That's all I can say. There's something good coming."

Hopefully these sessions will bear actual fruit. Previous attempts at following up Back To Black have been aborted due to Winehouse's, er, erratic behavior. The two did come close to getting some music out in 2008 when they almost recorded the theme song to the James Bond film Quantum Of Solace. When that session was bagged, White Stripes frontman Jack White and singer Alicia Keys quickly came to the rescue with the track Another Way To Die.