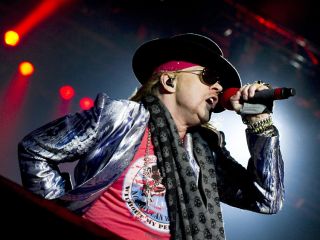 UPDATE: According to a spokesman for the Reading And Leeds Festivals, Axl Rose's Twitter account was hacked and all of Guns N' Roses' UK dates are set to go ahead as planned [via NME]

Rock's biggest pantomine continued in earnest last night. All of Guns N' Roses' forthcoming tour dates - including their UK Reading Festival headline slot - were thrown into question by an announcement on the @AxlRose Twitter account stating that "all upcoming Guns N' Roses dates are officially cancelled".

The full tweet, posted around 11pm BST, was as follows: "All upcoming Guns N' Roses dates are officially cancelled. Please contact your place of purchase for any refunds."

Some hopeful fans are speculating that Rose's Twitter account might have been hacked. However, if we'd hacked it, we'd probably have posted something more imaginative, along the lines of "Just hooked up with Slash, Izzy, Duff and Steven. Appetite shows confirmed. Reunion tours FTW LOL".