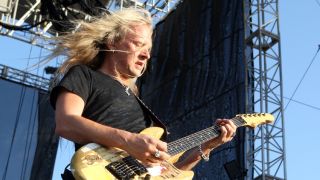 Jerry Cantrell says that the new Alice In Chains CD will be "a big one." (Image credit: Kelly A. Swift/Retna Ltd./Corbis)

Alice In Chains have just debuted a brand-new song, Hollow, via a lyric video created by fans who contributed images through Instagram. The song will be featured on the band's upcoming, Nick Raskulinecz-produced album, which will be released next spring.

Talking to Revolver magazine about the new record's sound and direction, guitarist Jerry Cantrell said, "I don't think you'll be surprised by anything you hear. It's us. But it's also really unique. It's got all the elements of any record we've put out, but it's unlike any record we've put out. Basically, it's the next chapter in the Alice In Chains book, and it's going to be a big one."

The group's last release, 2009's Blue Gives Way To Black, was their first with singer William DuVall, who replaced original singer Layne Staley, who passed away in 2002.