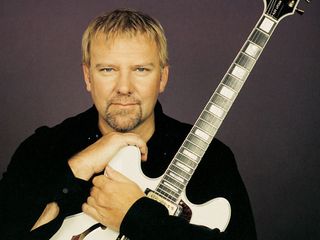 Alex Lifeson told MusicRadar that the band has no plans to make a 'concept' album, even though producer Nick Raskulinecz, who helmed the group's last studio effort, Snakes & Arrows, is urging them to do so.

"It's a very funny thing," Lifeson says. "We're in this mode of not working now, kind of enjoying being bums. And Nick is calling us with all of these heavy conceptual ideas. I think he thinks we have to make our grand statement - like it's now or never."

According to Lifeson, Rush haven't discussed concrete plans for recording their next album, but "we're thinking fall. After the summer I think we'll be ready to work again."

Buoyed by the group's work on 2007's Snakes & Arrows, Lifeson says Raskulinecz is at the top of their list to produce the next album. "We feel there's a dialogue there, a relationship we haven't quite finished. It's like a conversation you begin and gets cuts off - Rush have more to say with Nick, I think."

That chat may or may not include a double CD - "something we're not opposed to at all," says Lifeson - but that doesn't automatically mean the dreaded 'C' word need apply.

"Lots of bands have made double albums that aren't 'concept' records," says Lifeson. "The Beatles made 'The White Album' - that isn't a concept album. Neither is [Led Zeppelin's] 'Physical Graffiti.' Length is so subjective."

Lifeson chuckles at Raskulinecz's unbridled enthusiasm ("He's the ultimate crazy-fan!"), but he says when the band sits down with him to discuss the next album - assuming he's the one - they'll make it clear that they're only interested in making a great record - single, double or otherwise.

"That's the only concept we're after: 'Is it good?' If there's a storyline attached, well, I don't know...I'm not thinking along those lines. Didn't we do that already? Rush aren't into repeating themselves."