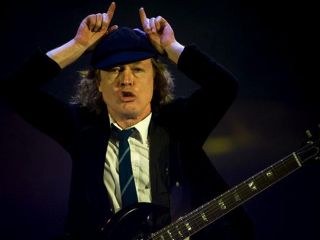 Angus Young has a whole lotta CDs and DVDs for you. But not a lotta wattage (Image credit: ENNIO LEANZA/epa/Corbis)

AC/DC have announced details of their upcoming Backtracks boxset. And get this: the thing is so big and comprehensive that it comes housed inside a guitar amplifier.

Backtracks, a 3 CD/2 DVD/1 LP collection of studio and live rarities, will be available in a limited number - only 50,000 of them - through the AC/DC website on 10 November. (But you can pre-order it now, natch.)

The first CD features 18 studio outtakes including songs that have appeared on 12", tour editions and the Australian versions of some AC/DC albums. All the tracks have been remastered and make their CD debut. The other two CDs boast live rarities spanning from 1977 to 2000.

The first DVD will contain the music-video collection Family Jewels 3, featuring all the band's clips from 1992-2009, while the second DVD showcases AC/DC/s 2003 club performance in Munich, Germany.

And for folks with working turntables, the 180-gram audiophile vinyl will feature 12 of the studio rarities featured on the first CD.

All this and an amp, too!

There's other goodies as well, such as a 164-page coffee table book complete with rare photos, a guitar pick, reproductions of posters, tour flyers and studio track sheets, plus an "I Do It For AC/DC" pin (the band's very first tour merch).

But musicians will be particularly interested in the 12"x12"x4" packaging that is designed to resemble a vintage amplifier, because, as previously mentioned, the head really does work!

OK, so it's only one watt - not exactly high-voltage firepower. Still, it's a collector's item no matter how you slice it. Hey, we tried plugging our guitars into the Beatles boxsets, and no dice.