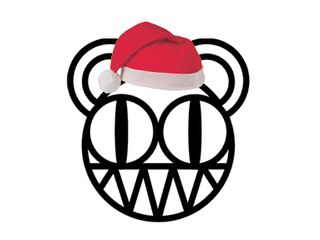 The Radiohead head getting into the festive spirit

2008, along with most other years since 1993, has really been Radiohead's year. There was a blinding New Year's Eve webcast, a massive, critically-acclaimed tour, Jonny Greenwood scored an Oscar-winning blockbuster in the shape of There Will Be Blood, and Thom Yorke was even voted into a list of the world's top Apple influencers.

It's therefore more likely than ever that you'll find yourself having to buy for a Radiohead fanatic this Christmas. But what do you get for someone who loves a band with such a varied musical output? Let MusicRadar help you out…

Radiohead's more mainstream influences may be easy(ish) to spot, but what of the band's more eclectic music preferences? Well, the electronica-minded Radiohead fan may appreciate Modeselektor, of whose electro/IDM stylings Thom Yorke is a fan (he even collaborated with the duo on their track The White Flash). Björk is another of Thom's favourites - he's collaborated with her a few times, and Unravel (from her Homogenic album) is one his favourite ever tracks.

Jonny, meanwhile, is a fan of the Mo'Wax label, as well as the New York-based Grizzly Bear (who supported Radiohead in 2008) and Olivier Messiaen's monumental Turangalîla-Symphonie. Perfect Christmas listening - we're sure you'd agree.

Cycling '74's Max/MSP software allows users to build custom synths, effects and more from scratch - making it the perfect gift for the Radiohead-influenced musician who's been struggling to work out how on earth Jonny Greenwood created the mashed up guitar sound at the end of Go To Sleep. Be warned though - Max/MSP 'graphical programming language' approach requires serious application to make it do, well… anything.

Max/MSP too complicated? Then how about a nice, easy-to-use audio FX unit with a touchpad, flashy lights and mental sounds to boot? Enter the Kaoss Pad. Radiohead members have certainly been known to use one or two of these madness-boxes over the years, notably Jonny Greenwood to mangle Thom Yorke's vocals on Everything In Its Right Place. For more wallet-friendly effects fun, be sure to check out the Kaoss Pad's little brother, the Kaoss Pad Mini, too.

If the Radiohead maniac in your life wants to recreate the ethereal synth sound on tracks like Pyramid Song then you'll be shopping for an ondes Martenot. Trouble is, only 50 were ever made - but Analogue Systems makes a controller featuring the original's glissando, 'au riband' playing method. A modular synth is required to get any sound out of the thing, but surely a true Jonny Greenwood fan should at least have one ARP2600 in their arsenal already... Check this live version of Thom Yorke's Cymbal Rush to see the controller in action.

Radiohead go to great lengths to reduce their carbon footprint - they employ low-energy LED stage lighting, try to book the most eco-friendly venues and even print their album sleeves on a material made from recycled trees. If your loved-one shares the eco-concerns of their heroes, eMotion's solar-powered music player could be just the ticket. It plays video, music, games and even charges your phone - ideal for use on the bus, train, bamboo raft or husky-driven sled.

If a solar-powered MP3 player won't sufficiently boost your buyee's eco-credentials, then how about an official Radiohead Water bottle? Not only does this gift look incredibly cool - adorned as it is with Radiohead's 2008 tour graphics - but drinking from a reusable metal bottle rather than buying plastic ones saves the world, too.

It may seem a weird choice, but boxing gloves are actually an essential bit of Radiohead fanwear. There are several phrases that justify the gloves' use: "Radiohead were better before they went all weird on Kid A", "Radiohead are miserable", "the pay-what-you-want In Rainbows scheme was bad for the music industry" to name just three.