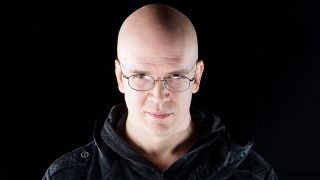 The Canadian prog lord talks rubbish guitars, dealing with the YouTube haters and the simple joy of being out of tune…

Got my first real six string…

"The first acoustic guitar I owned was made by Sears, straight from the catalogue. It was an absolute, unadulterated piece of crap. When the neck broke it separated from the body but it was still connected by some kind of freak of nature, so I would pull on the headstock and make it act as a whammy bar.

"The first electric guitar I had was a Vantage Avenger. It was a hideous red, but very functional guitar. My dream guitar at that time was the one that was $50 more than I could afford and I wanted it because it was camouflage.

"A few years later my Gear Acquisition Syndrome kicked in and I wanted a white Strat with two humbuckers, because I had seen KK Downing play something like that."

Let me show you the way…

"I must have been in fifth grade when this group of people came in to do a presentation at the school I was in. They had guitars and this guy was telling us about guitars.

"All of the kids went crazy when he played the guitar and that's when I thought, 'Oh, clearly this is what I need to do.' Later on, KK Downing was a big influence on me. I loved his style because it was out of control.

"It's the same reason why I love Jane's Addiction. When they first started, Perry Farrell's voice would hit wrong notes but with so much intention and echo that it forced itself to be right. KK Downing did the exact same thing for me when I was a kid."

When the going gets tough…

"Look at the internet, whenever you put anything up on YouTube there are so many people out there with a vested interest in being cruel and hating you. If you pay attention to that it will affect you. You have to be stronger than your insecurity."

I got the music in me…

"My biggest weakness as a guitar player is that I am not truly connected to the instrument. I have viewed it as a tool and a means to an end from the very beginning. So when I see players like Jeff Beck, guys for whom the guitar is an extension of their personality, that is something that I don't have.

"For me my connection to the instrument is that it is like a pencil to me. That led to my biggest strength as a guitar player which is that my vision musically is singular enough that when I have an idea I can get it out."

"It was very interesting to collaborate in songwriting with the other guys in the Devin Townsend Project on our new album [Transcendence]. It was scary because I hadn't done that for a long time.

"I really appreciate those guys. I realised that my need to control people and other musicians can be rather counterproductive. But, to be fair to myself, in the past I have experimented with letting go of control and it has blown up in my face with the record sounding poor.

"If there was anybody worth giving up some of that creative control to, it is the Devin Townsend Project guys who have spent 10 years doing what I have asked them to do. Collaborating on our new record became inspiring and challenging."

Devin Townsend's new album, Transcendence, is out now on Inside Out.