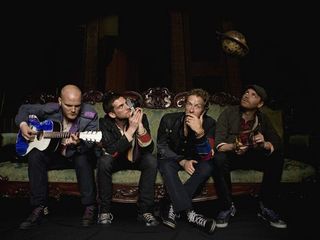 It's being widely reported that Coldplay's failure to land any hardware at the 2009 Brit Awards counts as a shock, and on the surface, it certainly does.

However, look a little closer and it's easy to come up with reasons why they left Earls Court empty-handed…

Let's start with an easy one. Of the four awards that Coldplay were nominated for, two were voted for by the public, which means the band didn't stand a realistic chance of winning either of them. Best Single was "supported by listeners of commercial radio", and given that Girls Aloud's winning song has been played to death over the past few months, their victory came as no great surprise.

Coldplay lost out to Iron Maiden in the Best British Live Act section - another predictable result when you consider how passionate fans of the latter band are. Followers of Chris Martin and co just didn't care enough.

Interest in Elbow has soared since they band scooped the 2008 Mercury Prize for their album the Seldom Seen Kid, so they didn't exactly come from nowhere to take the Best British Album award from under Coldplay's noses. However, they're certainly grafters, and the Brits voting panel probably felt that now was the time to reward them for years of hard work.

What's more, giving the award to Elbow lends the Brits a bit of credibility, suggesting that it's not just big sellers who can triumph.

Coldplay have sold close to seven million copies of Viva La Vida or Death And All His Friends, but it probably won't surprise you to learn that not all of these units have been shifted in the UK.

Coldplay have now transcended the British music scene and are perceived as a band that belongs to the whole world: they simply don't need to be championed in their own country any more. It might also be the case that, having watched them scoop three Grammys, the Brits voting panel decided that they'd been given enough silverware for one year.

4. They're not loved enough

Coldplay's unerring ability to appeal to the mainstream is both their blessing and their curse. It's helped them to sell millions of records, but they're not really a fans' band. Inevitably, a large proportion of their huge sales are to people who put CDs in their trolley next to bread and milk.

While the Brits voting panel probably wasn't anti-Coldplay, it seems that not enough people on it were willing to put a tick in a box for them in preference to someone else. They're not universally disliked, but they're not adored, either.