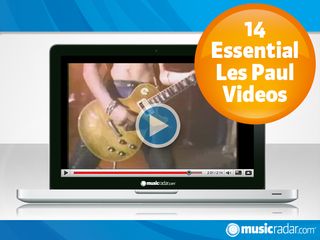 Les Paul may not have been a rock guitarist, but he arguably had a bigger influence on rock than any other player.

His involvement in developing the Gibson Les Paul would be enough, but his studio innovations with multi-tracking and delay paved the way for the how we record music.

In tribute to Les Paul's passing, MusicRadar presents 14 essential Les Paul videos - of the man himself and the players who made his guitar into a rock icon.

Sweet footage of the man at 90. "Here I am, still here!" he laughs. Through the guitars that bear his name, Les Paul will always be here. See more at LesPaulFilm.com.

Les Paul And Mary Ford: Waiting For The Sunrise

Les was a damn flash player for his day. Check the shred solo from 1:00.

Moore's solo hit - written with bandmate Phil Lynott of Thin Lizzy - remains a showcase for the power of his Gibson Les Paul. The guitar was a better idea than that red leather jumpsuit, that's fersure.

From 1980, with the Rev Billy F Gibbons splattering Les Paul riffs like a drunken decorator of the geetar. It's barely in tune, has daft dancing, too much distortion, wobbly tempo, but is numbhead rock'n'roll fun. Les Paul would have loved it.

Les Paul wore his legend status with true modesty, but he wasn't above having some fun with fame. Witness this Coors beer commercial. The last few seconds say it all.

Jimmy Page is all over the place, but this is undeniably a rockmungous reading with Gibson Les Paul a-blazing. (We love the headbanging kid with glasses at 1:38.)

The Who: Baba O'Riley live

When PeteTownshend windmills in at 1:47 with those huge, strident overdriven chords, it could only be one electric guitar. Genuine hairs-on-the-back-of-the-neck stuff.

Many players brandished a Les Paul in the 1970s but few did so with enough showmanship to match Marc Bolan's strutting peacock stage persona. This rare live clip proves that he could play the thing just as well as he could pose with it.

Okay, so Slash is playing a Chris Derrig Les Paul replica here rather than a genuine Gibson, but has anyone done more for the Les Paul in the last two decades than this man? Here's the classic GN'R lineup at their lean, dirty and dangerous best in New York in 1988.

It's 1994 so Noel Gallagher is playing the Les Paul given to him by Johnny Marr, the band are sporting a selection of truly frightful striped shirts and Tony McCarroll is drumming with the subtlety of an abattoir nailgun operative. And it still sounds like stone cold genius.

Eric Clapton vs George Harrison: While My Guitar Gently Weeps

Post-Bluebreakers, Eric Clapton didn't play a genuine Les Paul that often (and there's scant footage of the early days). On this celeb-heavy version of The Beatles' While My Guitar Gently Weeps, he does at least have a Les Paul back in his hands.

David Bowie/Mick Ronson: The Width Of A Circle

Some stunning guitar playing on an equally-stunning LP Custom with the finish stripped back to the wood. Mick Ronson - with his famed Les Paul - was a key part of Bowie's sound in the early '70s and it was Ronson's (and Marc Bolan's) flaunting of the guitar on stage that made the Les Paul the glam rock instrument of choice.

This is hardly a definitive list of Les Paul greatness, of course - so add your own recommendations below.