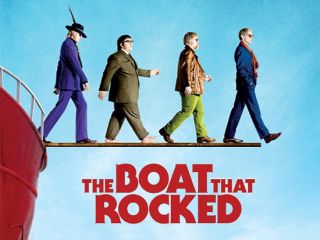 Among all the feel-good, fun-crammed taste of mid-sixties youth culture that is the latest British hit movie The Boat That Rocked, is a growing feeling that it could have been better in the musical stakes.

True, the historical inaccuracies and anachronisms are heavy ballast but only matter if it was a documentary.

Equally true, the mix of genres and images is more dazzling than a Technicolor dream - from the plot absurdities of Mamma Mia to the Dunkirk flotilla of rescue boats at the Titanic ending.

The music from spinning turntables or through tinny transistor radios - and why no car radios? - was great. But with a classic catalogue of 66-67 to choose from, here are the 11 tracks that could have (and should have) soundtracked The Boat That rocked...

An anthem for the original pirate radio ship, this Greenaway and Cook classic launched a harmony group from Birmingham and would have livened up the nostalgia.

This was one of the earliest examples of an artist being shamelessly built up by continuous playing of a single song on the airwaves and promoted in a blitz of publicity by manager Phil Soloman, who was also a Caroline director.

Great romantic signature song played by Johnnie Walker in his Kiss-in-the-Car spot on late night radio. He got thousands to cuddle up as he talked the smoochy mood. Cars with couples parked along the Essex coast facing out to sea and flashing headlights at a given signal while kissing someone in the car!

Arguably one of the top three greatest Tamla Motown hits out of Berry Gordy's Hitsville studio in Detroit, this footstomper was a turntable regular and also part of the influence into Northern Soul development that Radio Caroline had.

An old song from the 1950s updated by teenager Millie Small, this was one of many hits promoted by Caroline that DJ Johnnie Walker reckons would not have been such without pirate radio exposure. It also launched Chris Blackwell's Island Records, was DJ Simon Dee's favourite song and became the first international ska/reggae biggie.

This was Tony Blackburn's theme, with a barking dog - Arnold - layered on. Annoying as he was/is, (he did make some forgettable singles, including Don't Get Off That Train), Blackburn was youngest DJ at the time, nicknamed 'Tea Cosy' because of his early Beatles' haircut and has been a constant on the broadcasting scene for the past 40 years plus, even if he's nowadays a standby for nostalgic reminiscences spots.

Ironically this was not the last song ever played on pirate radio, but the first, introduced by Simon Dee - on Caroline, 199 medium wave, Easter Sunday, 29th March 1964. The actual station theme then was Round Midnight by Jimmy McGriff.

The final commercial was for Consulate cigarettes and this was the final track aired by Radio London as it closed down at 3pm on 14th August 1967, as well as being the seminal album of the Summer of Love 67 - Sgt Pepper's Lonely Hearts Club Band. The song, multi-layered in complexity and featuring a 40 piece orchestra broke new musical and pop ground, it took over thirty hours to record.

This because it was from the left-field of experimental underground rock championed by DJ John Peel in his 'Perfumed Garden' late night show, which laid his foundations as the finder and promoter of some of the more adventurous musical revolutions over the years, many of which became mainstream, including punk!

Another of the innovative groups discovered and pushed by John Peel, this was from their album The 5000 Spirits Or The Layers Of The Onion, number one folk album of that year and apparently one of Paul McCartney's favourites of the period. It included a mix of musical and vocal styles that foreshadowed their voyage into the outer reaches of psychedelia.

These record-introducing, time fillers, countdown tickers, station and jock identifiers and mood setters were first brought from the States by Caroline's founder Ronan O'Rahilly and later developed into an art form by Radio London and copied by every radio station since, right up to the present day.

Liked this? Then try:
9 songs that should be on the Watchmen soundtrack
The 10 guitars that changed music
The quick guide to creating a soundtrack