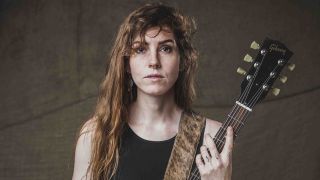 Emma Ruth Rundle's atmosphere-heavy guitar work is a lynchpin of Sargent House favourites Marriages and post-rock behemoth Red Sparowes, but her solo material displays a raw, more personal side to the LA native.

On second album, Marked For Death, Emma's love of atmosphere and alternate tunings is paired with an increased focus on her nuanced vocal delivery, resulting in an album that is more intimate and, as a result, emotionally heavy than past material.

Here, Emma lets us in on her unusual picking technique, the intimate relationship she holds with each of her instruments, and - of all things - time-travelling violins...

"It's hard to recall whose instruments were whose during the time in my life when I started playing. I was spending a lot of time at McCabe's in Santa Monica. It's most likely that the first guitar I was playing was a really cheap (but playable) nylon-string. I do remember having that around and eventually destroying it years and years later. I must have been 12 years old.

"The first guitar that was mine was a 1973 Sunburst Fender Mustang. I was 13 then - someone at McCabe's took kindly to me and sold the guitar to my father for almost nothing. I played it through my stepmother's bass amp along to Hendrix, Nirvana and of course Smashing Pumpkins… badly…

"A Mustang is actually a good choice for a young person because of its small body and short scale. Once I started playing more seriously, I sold the guitar (for a good price, ha), as I couldn't stand how twangy it was or the intensely radiused neck. I thought it might be bad luck to let go of one's first ride, but I needed something with humbuckers."

"Woah. It's so hard to say, but I guess I would have to save the Jag Baritone HH Special, just because it was so hard to acquire. I love all my instruments and have very personal attachments to them all. I don't have any children or pets now, just tools. Each one of the guitars has its own songs hidden inside.

"I might have to save my acoustic Blueridge OM as I have written the most music on it other than my Gibson SG (which is maybe the most 'replaceable' guitar). Hard to choose.

"The truth is, the fire might be a sign, giving me an opportunity to just walk away from all earthly possessions for good. I'd switch to flute at that point as it's easy to keep on your person at all times!"

"Not really, maybe my pipa. I had an Access Virus TI synth that was stolen, and I have never gotten over that."

"I have my heart set on the Chinese Gu Zheng. I guess it's considered a zither-like instrument. To me, it represents beauty, tradition and a domestic stability that I seek today. In other words, I feel like if I'm able to acquire one and get lessons it would mean I was able to stay in one place (geographically and mentally) long enough to improve myself, and that doing so would bring me some peace. Here is an example."

"All of it, really. I wish I had learned to play with a plectrum. I play with extended nails on my right hand in a bastardised fingerstyle.

"I should be more familiar with standard tuning. I moved to alternate tunings very early on as they were just easier for me to make sense of. This has alienated me from other players to some extent. There is so much to learn... always."

"I practised last night - I try to run through my set and then invariably end up noodling. The truth is I've never been a person who practises or does homework. I wish I was more focused and committed to exercises or learning specific things (pieces, styles, scales - anything) but I'm not. The instrument is a portal.

"Learning to play '80s-era metal solos on electric guitar is a goal I have set for myself to accomplish in the next 10 years. I know I will have to learn the art of practice first in order to learn the shreds."

"I would really have to meditate on this question. King Buzzo taught me a few things on tour once, and that was a real dream come true. Maybe I would spend a day with the late Chris Whitley. Richard Thompson… He is a master of all styles - so maybe he would be the best choice."

"Is there power there? Could I harness electricity in some way? Let's assume no. I would take a violin as I think I could spend a lifetime trying to learn how to play it, and I heard somewhere that if you play a certain note at the right time, it tears a hole through time and space - so maybe I could get back to the mainland that way, eventually."

"Becoming aware of being on a stage. I've never had a fall or been assaulted. There are the gear failures all of us come to accept as part of the live experience."

"I would provide some encouragement and convey that it's okay to play one's own style and to work harder at developing it. I wish I could go back to help that girl and make her less afraid. I would advise her to start calling herself a guitarist and to feel unashamed and unafraid. Those feelings are ultimately a waste of time and get in the way of progress and accomplishment.

"I would try to encourage young me to play with other people - I felt so alienated due to fear. I would also have told her to start working on those shredding solos then so I wouldn't have to start from the ground up now. Ha!"

Marked For Death is out on 30 September via Sargent House.

Me and my guitar ArcTanGent edition with 26 players