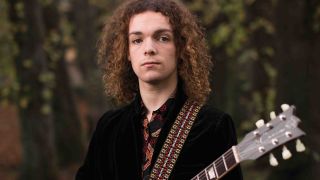 With second album Lady In Gold, Blues Pills don't just have the blues; they have soul.

Before the four-piece head out on a huge European tour, we got Dorian's thoughts on vibe-y electric finds and flooded festival stages…

"My first guitar was a classical guitar. I was nine, and I got it at a flea market in 2004 - people selling their stuff out on the street, it's really quite common in France on a Sunday. My mum bought it for me."

"If the building was burning down, I don't think I'd be thinking guitars, haha, I'd probably think of saving myself and other people! But if everybody's out and I have five minutes to grab a guitar, I like my Les Paul that I play on stage and my SG, too, made in the 1970s that I bought from Australia. And a couple of old acoustic guitars - I'd try and grab as many guitars in my hands and run away!"

"Not really that I can remember - if I buy stuff, I have a hard time to sell it because there's a reason why I bought it. I almost sold my Chicago Iron Octavia fuzz pedal - I bought it at the beginning of Blues Pills, but did not use it up until the recording of the first album, when I realised that it's a really nice-sounding fuzz. We used it on this record a lot as well as live; going without that fuzz would be very difficult, actually. I didn't let it go but I almost actually sold it!"

"There's always things like recording equipment, like a small tape machine, but as far as guitars go, a 1965 Firebird - those are nice, and a '60s SG with the P-90s, because it's a good guitar. I'm always looking for those old Gibsons - not a '59 SG that costs the price of a house; something that's still old and has a vibe, but for a price that means it doesn't have to be in a museum, where you can play it on stage and be happy.

"Yep, I'm always trying to get better! I suppose, fingerpicking - acoustic fingerpicking. I'm always trying to get better, but I guess with live it's always electric guitar - so I guess I don't want to play so much faster than I do, but more play something I actually want to listen to. I do like acoustic guitar and fingerpick amongst other stuff; it's always nice and possible to improve!"

"This morning, when we played three songs for Vintage TV in London, we played two songs from the new album Lady In Gold and an old song, but I see every time I play an instrument as being practice. It might be in the studio recording a take, in my room before I go to bed, or in front of an audience or not. So the last time was this morning and it was nice. There's no one song I practise; it's more I make sure I feel comfortable on stage than worrying about playing something really technical, making sure my whole body is comfortable before I go on stage."

"There are so many! But it probably has to be Peter Green…"

"An acoustic guitar - a nice one If I'm going to be on a desert island!"

"It was a few weeks ago, well about a month ago now, it was Bråvalla Festival in Norrköping, Sweden. It's a really nice festival, but we were really unlucky because the rain got really crazy. In a matter of five minutes, the whole stage was flooded and all of my equipment was underwater - just seeing my pedalboard, amps, and guitars underwater, no-one really reacted on time, as it was a matter of two seconds so there was no one to blame. Luckily most of the instruments were completely fine."

"Keep on doing what you're doing; that's all that comes to mind. I don't feel so old compared to my younger self… maybe I could answer that question properly in 50 years!"

Lady In Gold is out now via Nuclear Blast. Blues Pills tour the UK and Ireland in November - full dates are below.