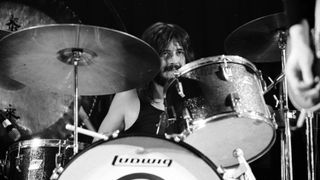 We’ve all been there: you scan the setlist and then you spot it. It’s the tune that always catches you out. To everyone else it’s obvious, but you hear it one way and whatever you do you can’t hear how it’s supposed to be counted.

You’re not alone. This confusion is often caused by the fact that our brains naturally assume the first note we hear is on the first beat of the bar - an assumption that obviously isn’t correct.

Dynamics and phrasing can help create this illusion, and it can be difficult to convince your brain to hear music differently once you’re anticipating it to be the way you expect.

To overcome this, you need to hear it differently. So, we’ve chosen some of the most common confusing intros to demystify. Where’s the 'one'? Let’s find out!

Not only was John Bonham considered by many to be the greatest rock drummer of all time, but Rock and Roll is one of his signature drum parts. Unfortunately for drummers, not only are we supposed to know this as staple of rock drumming, but it feels impossible to count, tricking us into thinking this simple 4/4 pattern simply must contain an extra half beat. It doesn’t.

The story goes that Bonzo borrowed the phrasing from Chuck Berry’s guitar riff on Run Run Rudolph, and it certainly fits. You see, that first snare hit in the locomotive intro part isn’t on beat one.

It’s a pick-up starting on the ‘&’ of beat three the bar before, placing the fourth eight-note he plays firmly on the downbeat. So, give yourself a count-in of three and start hitting on the ‘&’, and you’ll have this iconic part down in no time.

Kings Of Leon - Sex On Fire

Right, let’s get one thing straight: it starts with guitar, the drummer isn’t necessarily to blame here! However, this function band favourite has become the cause of many a wedding blush, for all the wrong reasons.

The original guitar intro features a fairly un-dynamic performance, with very few accents giving away downbeats, and it’s this, coupled with our natural lean towards the 'one' that causes the confusion.

The first guitar note hits on beat 4 of the bar before, leaving the bass note of the phrase to fall on beat one. The drums enter with an open hi-hat on the ‘&’ of beat 4 during the fourth cycle of the riff. Hear it wrong and you’ll be a beat behind the guitar player. Hear it correctly, though, and you’ll become a legend on your local dep scene!

Jimi Hendrix - All Along The Watchtower

The source of countless band bust-ups, Hendrix’s definitive cover of Bob Dylan’s All Along The Watchtower is possibly less of a conundrum to so many. But it still stands that this has caused plenty of disagreements among drummers, as well as their bandmates, which often seems to stem from guitarists hearing the part differently.

The first snare hits and guitar chords come in on the ‘&’ of beat three, creating a pick-up to the downbeat (played on the bass drum). There’s a vibraslap occurring on beat three of each bar in the intro too, but the giveaway as to the ‘one’s’ whereabouts should be Mitch Mitchell’s snare hits during the last bar, which firmly outline the downbeats.

Still can’t convince your bandmates? Just listen to the lead guitar break as the band comes in, and hear how it all fits around Mitch’s simple Motown-style downbeat-accent groove.

Long before it was immortalised by Ricky Gervais’ dancing, The Trammps’ Disco Inferno showed-up many-a-miscounting drummer. The snare/cymbal crash kicks things off, and then could lure you down the path of thinking there’s an extra beat-and-half in the build-up before the beat kicks in.

The anticipated push at the end of the last bar makes us assume that the snare hit occurs at the same point in the previous bar. Not so. That snare/cymbal crash is beat 4. The first notes played by the bass and strings is beat one. So, by hearing it on the last beat of the bar before, you can give yourself an easy two-bar build up with the push at the end. Simple.

The Eagles - Take It Easy

This simple country-rock classic creates more confusion come gig-time than asking your bandmates to set up a cymbal stand correctly. Chances are, the rest of the band keep looking at you like you’re coming in with that eighth-note snare/tom fill in the wrong place.

Those first chord hits: not on the one. Repeat this to the guitarist and bass player, and if they argue, put your fingers in your ears and say it louder. The stab accents happen on the ‘&’ of beat four each time. That’s it. Leaving your fill to bring the band in from ‘&-4-&’ in the last bar. Your bass drum first plays on the one of the next bar, and you can get to ‘loosening your load’.