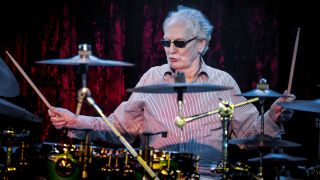 Newly available, final tickets for a forthcoming live tribute to Ginger Baker, featuring Eric Clapton and star guests, are now up for grabs in a charity auction.

The concert, plans for which were announced shortly after the legendary drummer's death at the age of 88 last October, originally sold out in minutes, but now charity Leonard Cheshire is auctioning tickets to the 17 Feb all-star gig. Baker was a supporter of the charity.

A statement reads: "The setlist for the concert will look to honour Baker’s lifetime in music and will, of course, include Clapton and Baker’s work together in Cream and Blind Faith.

“Proceeds from the auction will help Leonard Cheshire offer life-changing support to more disabled people. Their projects and services support disabled adults and children to live the life they choose, creating fairer and more inclusive communities.”

The auction is open now and will run until 9pm GMT on February 12.

To bid for tickets to Eric Clapton & Friends: A Tribute To Ginger Baker, click here.