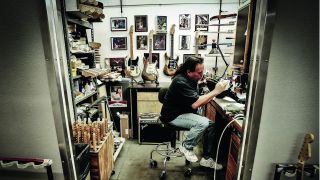 Fender has parted ways with one of its most renowned Custom Shop Master Builders, John Cruz, seemingly following his sharing of a controversial facebook meme.

The luthier's post, since deleted, appears to have been shared on a fretboard forum thread, and originally seems to have been brought to Fender's attention by bassist Gregor Fris.

Fender has declined to comment beyond confirming that Cruz is "no longer with the company."

"As a matter of company policy we do not comment publicly on matters like these," the firm stated, "however we can confirm that John Cruz is no longer with the company."

On June 1, Fender released its own statement in response to US protests, sayiing "We will not tolerate racism."