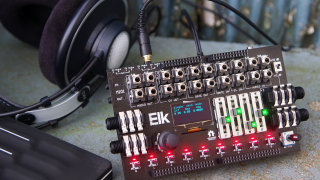 The ELK Audio OS is a way to turn small computer devices into dedicated VST plugin hosts. It’s been used by Elk Audio (formerly Mind Music Labs) to make a hardware version of Steinberg’s Retrologue and to put an Arturia Prophet V into Matt Bellamy’s guitar. Beyond the PR gold, the idea is to let anyone hardware-ise a VST plugin.

The open-source version of Elk Audio OS – the one that anyone can use with a free license – runs on Raspberry Pi 3 and 4, with the Elk Pi dev kit allowing developers to build VST plugins specifically for the platform, running at a reported latency down to 1ms.

The Blackboard acts as a more user-friendly interface for the entire setup, allowing standard audio connections to be made in and out, and parameters to be changed using faders, buttons and even a small screen.

Find out more about the Blackboard, Elk Audio OS and the Elk Pi developer kit at the Elk Audio website.