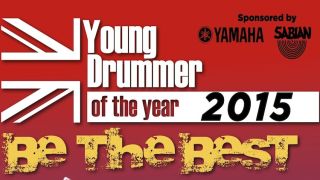 The Mike Dolbear Young Drummer of the Year competition is returning for 2015, and Yamaha Music Europe Gmbh UK have been announced as the event's sponsor.

Read more about the event, which is also sponsored by Sabian and is supported by Rhythm, below from the official Yamaha press release.

The inaugural competition kicked off in October 2002 when a story was posted on the mikedolbear.com website inviting young drummers from around the UK to enter the first annual Young Drummer of the Year competition.

The competition was put together to give the country's young drumming talent a national and indeed international platform, which we hope will be the first steps in their musical career.

Since then the competition has seen tremendous growth both in the number of entrants and the standard of the finalists. The finals are held every year at the Royal Spa Theatre in Leamington Spa judged by a selection influential and high profile Artists and Music Industry's figures.

The first selection process will result in a shortlist of forty entrants. These 40 entries are listed on the mikedolbear.com web site and are then reviewed by a number of independent judges who will choose ten finalists between them. Finalists will have to perform a solo piece and two other pieces with a band on the day.

"I was a judge at the very first finals of the Young Drummer of The Year event in 2003," Gavin Thomas, Product Manager of Yamaha Drums explains."And I am thrilled to see how it has established itself as one of the most important events of the calendar."

"Along with showcasing their talents in front of a very influential audience, the competition develops the contestants social and confidence skills at a very important time of their lives. This not a competition where just a single winner will benefit from, it's a competition where everybody wins.

"Yamaha Drums are proud to support Young Drummer Of The Year, 2015 and we would like to sincerely thank Mike Dolbear for his dedication in promoting this wonderful event and make young dreams become a reality."

For more information on the Young Drummer of the year 2015 competition, including entry forms visit www.youngdrummeroftheyear.co.uk