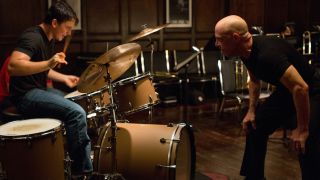 You would have had to have been living under a rock for the last few months to not have heard of Whiplash.

The movie told the story of a young, talented jazz drummer - played by Miles Teller - and his tyrannical band teacher (JK Simmons), and put drumming right up there on the silver screen.

And this was no flop either, the Damien Chazelle-directed flick was nominated for five Oscars, winning three, including a Best Supporting Actor gong for Simmons.

Whiplash is released on DVD and Blu-ray on 1 June, and we have three copies to give away.

The discs are packed with extras, including the usual deleted scenes and commentaries. But, there is also a 42-minute documentary featuring famous drummers who share stories and discuss their passion for the craft including Chad Smith, Peter Erskine, Gina Schock, Doane Perry and many more.

All you need to do to stand a chance of winning is head over to www.futurecomps.co.uk/rhywhiplash and answer a simple question.