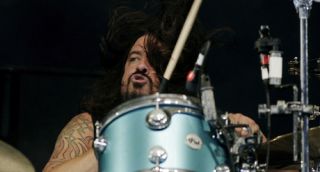 Dave Grohl has surprised music fans at SXSW by confessing his love for Psy's 'Gangnam Style'. Delivering the key-note speech at the Austin, Texas music showcase, Grohl revealed: "I can truthfully say out loud that 'Gangnam Style' is one of my favourite songs of the past decade."

Dave also spoke about his time with Nirvana and revealed that Kurt Cobain had told a big music industry figure, "We wanna be the biggest band in the world."

"I laughed, I thought he was f**king kidding…" said Grohl. "How Kurt even thought we could make a ripple in this mainstream world of polished pop music was beyond me."

He went onto reveal that the recording sessions for Nevermind at Sound City were "the sound of three people playing like their life depended on it", adding that, "That ripple that had been so unimaginable had become a tidal wave," as the album - initially with only 35,000 pressed -went on to sell 300,000 in a week.

Attempting to explain Nirvana's success, he offered: ""It was honest, it was pure, it was real."

The best three minutes of Metallica ever…

Someone has taken the time to compile all of James Hetfield's 'Yea's into three minutes. In doing so they have also possibly put together the best Lars Ulrich drum track ever - check it out.

A few weeks back we were invited to Tama's UK HQ for a sneak peek at their brand new flagship kits - the STAR range. A few days later we took delivery of not one, but two STAR kits and boy, these are some gorgeous drums. Keep an eye out for our exclusive review in the May issue of Rhythm.

Pumping on our stereo

We've been spoilt this week with new music. First the latest Clutch record then the debut from Black Star Riders (featuring Jimmy DiGrasso at the kit) are among the treats we've been spinning.

We've also been listening to some classic Seattle grunge - that's new! Mudhoney and Alice In Chains both return with new albums next month. The latter features plenty of trademark time-signature-bending work from Sean Kinney, with the mid-tempo aural assaults of 'Hollow' and 'Stone' showing AiC back to their brutal best. The Mudhoney album, Vanishing Point, is filled with great riffs, punk attitude and scuzzy guitars, plus great drumming courtesy of Dan Peters. Also out now is a new film, I'm Now: The Story Of Mudhoney. Check out the trailer here.

Then we went and had a listen to Paramore's new album, featuring no less than Ilan Rubin (pictured above) on drums. Watch out for a full review in next month's Rhythm! Here's a peek at the second track to be taken from the album, 'Still Into You'.

Drum Cover of the Week

We're big fans of Adventure Drums here at Rhythm, and among the many fantastic covers to be found at his site adventuredrums.com, is this coverin which he Abe-ly tackles Deftones' 'Hole In The Earth'.