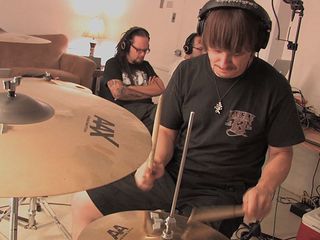 Ray Luzier: cymbal minded during the sessions for The Path Of Totality

Whether or not you call it dubstep, Korn's The Path Of Totality was certainly a change of direction for a band that you wouldn't necessarily have expected to work with producers such as Skrillex and Excision.

But how does a rock drummer approach a record on which the drums have already been programmed before he has so much as tickled a hi-hat? Find out by watching the video above in which Korn's Ray Luzier talks us through the recording process for The Path Of Totality and see footage from the studio sessions and the band performing live.

Korn are touring the UK in March and April 2012:

Buy a copy of Korn's latest album The Path Of Totality.