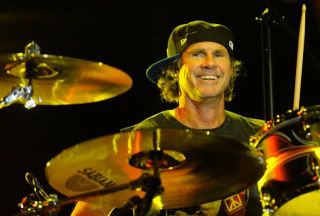 UPDATED: A date has been set for Chad Smith's drum battle with Will Ferrell.

The pair will do battle on the Thursday 22 May edition of The Tonight Show.

"Ever since the Super Bowl, this delusional imposter claiming to be me has forced me to defend my identity," says Smith. "What's up with that? I don't understand why he, all of a sudden, decided he wants to be me. It's not enough to be one of the biggest movie stars in the world?It is going to be complete public humiliation on the part of Will Ferrell."

Ferrell added: "I have not been practicing. There's no amount of practice that would help me become a good drummer."

"Chad apparently has a lot of anger and issues. I don't quite come from the same place. I don't get nearly as many references to being Chad Smith as he does Will Ferrell. I'm not looking at this as much as a competition so much as a public service to the world."

There is, of course, a long old backstory to this one. First of all, via a video on Funny Or Die, Will Ferrell claimed to be Chad Smith…

Then Chad replied, telling Ferrell to stop impersonating him, and challenging him to a drum battle, "I've seen your skills," says Smith. "You don't got 'em."

Then, during an AMA ('Ask Me Anything') on Reddit, Chad Smith again threw down the gauntlet. "Tell Will Ferrell anytime, anyplace, I'll take him down," said Smith. "I don't want to embarrass him, but I'd say don't bring your family. Especially children. I don't want them to see this."

Smith also tweeted a picture of himself giving blood: "Gettin juiced for the drum battle."

After the AMA, Chad signed off with, "I hope that Mr. Ferrell decides to do the right thing and get this over with once and for all."

Ferrell replied to his with: "I graciously accept your invitation to a drum battle. If we can raise $300,000 for Cancer For College I will face off with you in the greatest drum vs. cowbell showdown the world has ever seen. We can do it on stage at a Red Hot Chili Peppers concert or in front of a mutually convenient public library. Your call."

Now the date has been set for the drum battle, and we're super-excited at the prospect. So long as Ferrell keeps his nuts off the kit…