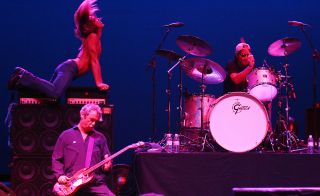 Asheton at the kit with The Stooges in 2007

Asheton, who co-founded the band back in 1967, died on 15 March. He was 64 years old. Details regarding the cause of death have not yet been released.

Iggy Pop was quick to pay tribute to his band mate, saying in a statement: "Scott was a great artist. I have never heard anyone play the drums with more meaning.

"He was like my brother. He and Ron have left a huge legacy to the world. The Ashetons have always been, and continue to be, a second family to me. My thoughts are with his sister Kathy, his wife Liz and his daughter Leanna, who was the light of his life."

Asheton's involvement with the band had lessened since suffering a stroke following a show in France in 2011. However, while he had sat out live performances since the stroke, he did record with The Stooges for their 2013 album Ready To Die.