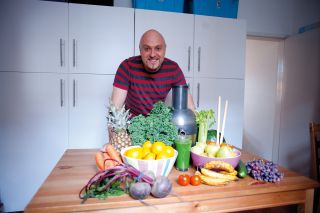 Paul Kodish (FRESH:LIVE etc) is on hand this month to give his juicing recipes and tips. Pic:(c) Natalia Kantor

Hey drummers of a juicy disposition, Steve Barney here again! Hope you're all in good health and enjoying whatever shows you've been rockin' recently!

A quick thank you for the kind feedback from our first online recipe/feature … seems a lot of you are really open to the idea of Juicing as part of a healthier diet.

I really hope to influence or even just nudge to make you at least stop and think before you eat that after-gig XL Kebab!

After finding out a few of my drummer friends are also into juicing/blending, I thought it would be nice to now and then bring in a guest in to share with you their Juicy story & recipe…

My special guest for this blog is an electronic drummer/powerhouse from Willesden, north west London.

As comfortable playing at 200bpm as he is juicing up some amazing recipes,please welcome, my friend Paul Kodish.

"SO ROCK N' ROLL IS ALL ABOUT GETTING SMASHED ON THE ROAD? B*LLOX TO THAT!"

"Ever since i met Trish Tucker from Passion4Juice when I was playing Glastonbury 10 years ago, I've been a Juice head!

"Trish educated me on how to get all the right nutrients into my body… juices get into your system immediately so you immediately feel great.

"I spent about £60 on juices at her stall that weekend - after about god knows how many juices, she just gave them to me for free and that was that - we became good friends!

"I got home and couldn't work out why I felt so good, considering I'd been hammering it all weekend.

"Though to be honest, it's been in the last year that I've gone in hard and basically cut out all crap food and drink out of my life… no bread, no chocolate, no more Havana Club seven-year old rum!

"I recently got re-inspired by Joe Cross's Fat Sick And Nearly Dead documentary (though I only needed to lose 14lbs - not 300lbs like the guy in the movie) anda documentary called Hungry For Change is great to get back on track.

Juicing really works and it's fun creating your own custom combos. Anyway, my concentration is a lot better, sex is better (ginseng), drumming feels better on many levels. I've always been a gym person, but that has become more enjoyable too.

"If you're not a gym person, then I highly recommend just long walks or cycling (ya gotta sweat somehow asjust drumming isn't enough - unless you're one of those nutters who drums all day long like I did when I was 15 years old!).

"When I tour the states, I always just head to the local whole-foods market and spend my PD's on fruit and healthy food and stock up the tour bus. Sound-checks have become fun again,rather than sitting there in a haze from the previous night's debauchery (yawn!).

"So, Juicing isn't such a problem when you're on the road, you just gotta be bothered.I was recently lucky enough to get sponsored by Passion 4 Juice for an Australian tour, so a juicer was supplied. But most cities now have healthy juice bars if you can't be bothered to bring a juicer .

"Anyway fellow drummers, I challenge you to do a whole tour on juice and smoothies… bet ya can't do it!"

"That's all I need in the morning to get me started -lunch is my main meal now."

Into a high-speed Blender:

Tablespoon maple syrup (or to taste)

For more on Juicing, check out Barney's healthy inspirations: