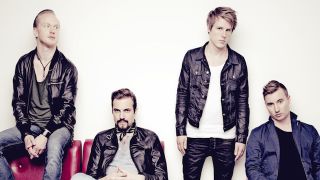 With a host of acoustic versions of their super-charged rock anthems doing the rounds we caught up with Per Andreasson, drummer for Swedish band Royal Republic, who gave us his tips on playing songs acoustically. Just don't ask him to turn down the volume…

When translating a rock song into an acoustic setting is the aim to switch the beat and tempo up completely, or do you generally use the original beat and song form as a template?

"I'd say it depends completely on the style of the arrangement we end up with. People who know us know that our acoustic versions usually differ a lot from the originals. With most songs the tempo stays roughly the same, but the flavour of the groove is altered to fit the style. With 'Tommy Gun', I play 16th notes on the snare with accents on the backbeats and since the song is shuffled… well, I'd be pretty brave not to play shuffled as well."

What made you take that approach with 'Tommy Gun'?

"I don't think I thought about staying true to the original beat that much, I just played what seemed like a very natural choice for that style and song. 'Tommy Gun' is a very straightforward song, no matter what version you play. I think anything other than a straight beat would jack up the vocal-line and wouldn't work very well with what Jonas is playing… No tricks are the best tricks, eh?"

Are there certain types of Royal Republic songs that lend themselves to acoustic versions better than others, or would you be willing to try it with everything?

"Since we now have country, bluegrass, boy-band, rap, bossa nova, acappella etc I'd say we're pretty much open for anything. The country/bluegrass always seem to be the most obvious translations, but as we have quite a collection of those, we usually look for other styles now to complement the arsenal. Our acoustics were always about having fun and we don't want it to get stale, but that also means we have to work harder to find fresh ways of arranging that still work
for whatever song we're trying to translate."

When do you first decide to do alternative versions of your songs?

"The first one we did was 'I Must Be Out Of My Mind'. That bluegrass vibe just seemed to happen naturally when we tried playing it with acoustic guitars for the first time. The way we first played that song is still pretty much identical to how we play it today, and I actually think the acoustic version is almost better than the real one. I think that first rehearsal of that particular song is why we do acoustics the way we do them. We just realised that we could add another dimension instead of just changing the instruments and playing the songs a bit slower."

Other than kit, do you use any other percussion to enhance an acoustic percussion, eg. tambourine, cajon etc, and why?

"When we do radio sessions I'm usually not allowed to bring a kit, not even a small one. So me and Jonas play tambourine and shaker. I've been talking about getting a cajon for a long time, just because you can play drumset beats on it, but I seem to be too lazy to ever get around to ever get one. I will though, one of these days…

"Practice. Haha! But seriously, anything you wanna become better at you have to practice. Most people are too lazy and ignorant to actually practice an instrument like a tambourine (myself included). All you have to do is slap it right? But it's seriously scary how many times you see people on a stage wielding rhythm instruments with absolutely no regard to the sound they're actually making - singers frantically shaking a tambourine as if it was some accessory to make them look cooler.Whatever you're going to do on a stage, do yourself, your fellow musicians and the crowd a favour and spend some time making sure you have your s**t together before putting it out there. The good news is that you don't need to practice anywhere near the same amount of hours as you would on a guitar. But I think that's also the problem… it's so easy people just don't bother at all and end up looking like d**ks because of it."

Do you use brushes to temper the volume or add new textures to an acoustic performance?

"I used brushes in the past, but it didn't really give me the volume I need so now I just use hot-rods or even sticks. People often make the mistake of confusing 'acoustic versions' with 'softer versions'. We're still a rock-band, and we still play loud as hell… even without electric guitars."

Do you have plans to strip back any other RR songs or do a full album like Nirvana did?!

"We've been asked many times and we always said no. We don't want people to confuse our acoustic sound with our real sound. At least not yet anyway..."