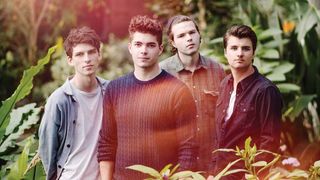 Drummer Henry Kilmister is a fan of Ringo

Since self-releasing two singles, 'Adventurers' and 'Sinking Ship', BBC's Introducing have been keenly hyping the band, and they just headlined the Introducing stage at Radio One's Big Weekend.

Check out the video for their track 'In The Long Run' at the bottom of the page to see just what all the fuss is about, and how they bagged a recent high-profile support slot with 'Budapest' crooner George Ezra.

As a drummer who clearly knows a thing or two about song drumming, Henry's in a good position to talk about what makes his hero, Ringo Starr, such a special player.

"My favourite Ringo tracks are all from the Beatles catalogue, three favourites are hard to pick but here goes! 'Here Comes the Sun' (Abbey Road), 'She Said She Said' (Revolver), 'Help!' (Help!).

"I think these tracks are all great examples of what made Ringo such an incredible drummer, and the perfect drummer for the Beatles. First and foremost they have that immediate, inimitable Ringo style. None of them are technically the hardest pieces to play, but Ringo was never about that, it was all about serving the song to the fullest capacity in his own unique way. All the Beatles songs are so good in their own right anyway, they needed nothing invasive to add to them, only complementing. Ringo does that, it's a bonus that every hit in these songs has a bit of his unique personality in there.

"I'm not sure people have ever thought of 'Here Comes The Sun' as a great drum track, they may well do, but I think it's one of the most perfect drum parts I've ever heard. Listen to the groove he has with McCartney's bass in the verses, the snare hits and fills in the 'sun, sun, sun' section; all his drum work only complements an already amazing piece of songwriting.

"I had to include 'Help!' as it is one of the first pieces of the Beatles repertoire I learned on kit, I could play it all day with just the bass guitar and be happy! The beat has such a groove and is harder to keep hold of than I first thought when learning it. Again it's not complicated, but it adds another definition to the song and works really well with the tambourine in the choruses.

"With 'She Said She Said', I just love the rolling snare and tom fills, they're really syncopated and never quite the same, the ending almost goes into heavy metal with the four-four crash and snare too!

"It would be hard for me to not indebt a lot of my own drumming style to Ringo. I've never been a drummer interested in virtuosity. You could play all the rudiments backwards with your sticks in your mouth, but if you can't use your drumming to complement a song, you're of no use to anyone in a pop band, which is what the Beatles were. I'd much rather be known as a drummer that could groove and play interestingly to a song than play with all the speed but no style or substance. It's something I always think about when coming up with parts for Port Isla - what can I play that sounds like me, but also fits the songs? Ringo could do that, better than most other drummers, so for me he'll always be up there as one of my personal heroes."

Read more on the genius of Ringo Starr in the Summer issue of Rhythm, which is available here!