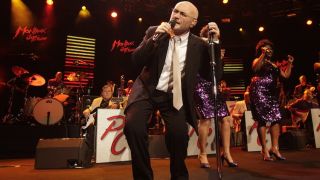 Phil Collins has spoken out over his appearance with Led Zeppelin at Live Aid 1985, saying the show was a disaster.

Collins told Q magazine about the show, which was the first time the surviving members of Zeppelin had shared the stage since the death of John Bonham.

He said: "I thought it was just going to be low-key and we'd all get together and have a play. But something happened between that conversation and the day - it became a Led Zeppelin reunion.

"I turned up and I was a square peg in a round hole. Robert was happy to see me, but Jimmy wasn't. It was a disaster, really. Robert wasn't match-fit with his voice and Jimmy was out of it, dribbling. It wasn't my fault it was crap."