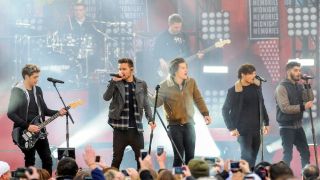 BASS EXPO 2014: As rhythm section for the hottest of hot pop properties, the hysteria-inducing One Direction, bassist Sandy Beales and drummer Josh Devine may well have a dream gig, but they also know there's a queue round the block of musicians waiting to fill their shoes.

As part of Bass Expo 2014, we spoke to Sandy and Josh about what it takes to be a killer on the money pop rhythm section. And, as if to prove the point that this really is one hell of a gig that these guys have, when we spoke to the duo they were taking a well-earned break from preparations for One Direction's sure-to-be-sold-out stadium tour.

Over to Josh and Sandy for the inside word on the importance of locking in, the ins and outs of playing to the click, and why you really should check out Alien Ant Farm…

Josh Devine: "You have to be able to gel and lock in. You have to really listen to each other, but it's more about just feel. If we're just jamming we're quite in-sync with where we're going to push. That comes with just practicing together a lot. If we're not locked together then it makes the whole low end sound muddy and it sounds like it's falling apart."

Sandy Beales: "I think getting the right sound is important as well just so we can hear each other on stage. Just things like having the kick drum pumping through my wedge, that's important. Being able to lock in is the main thing, though. That is the one thing that no matter what the genre is, you have to lock in."

Sandy: "As we're playing to click on tour it's got to be spot on. We're almost being dictated to by the click so if we're off with the click and off with each other, it's not going to work. You have to balance playing together and also with the click. It takes a bit of time. But you don't even hear the click after a while.

Josh: "We've done a lot of click playing. Playing to a click is vital for anyone, you need your click playing to be on it. For this show you just need to adjust to the different click times but it does become second nature. We rehearse so much that we could fall asleep up there. We're about to go out on a stadium tour so for that we will have a good month and a bit of rehearsals and then full production rehearsals. As a core band we're going to sit together for a month and strip everything back to make sure everything is perfect."

Sandy: "Everything needs to be bulletproof. By the time we get to the stage it has all been worked out so much that it's second nature."

Don't… Argue with your MD

Sandy: "I think working with a Musical Director is one of the main skills you need. You need to remove yourself from the situation and think about what is best for the gig and not what is best for you as an individual."

Josh: "You need to take constructive criticism and take being told what to do and how to play your part. If the MD things differently to you at the end of the day, it is the MD's choice and they know best so you need to deal with that."

Do… Know your gear

Sandy: "The MD might say they want this or that sound, or for it to sound like the record, so to know what gear you need to get that sound is a good skill."

Josh: "Yeah, it's about knowing how to create the sound that's needed. You need to have the knowledge of how to do that. Also, if anything goes wrong you need to know how to get around that with the gear that you have."

Sandy: "The adrenaline can make staying steady difficult for the first few shows. But the whole tour is to click and that can be a godsend at times because you've always got that to fall back on - you can always reference the click if you feel like you're getting carried away. The essence of live music is not always being bang on the beat. Pushing a beat isn't the worst thing in the world."

Josh: "Everyone has moments where you get excited and start to push. The nice thing with Sandy is if I start rushing he doesn't go, 'What are you doing?' He goes with me. That's the beauty of having a tight rhythm section."

Do… Learn from the masters… and Alien Ant Farm

Sandy: "I love the Steve Jordan and Pino Palladino rhythm section combination. That's pretty solid. Someone that we both buzz off that is an underrated rhythm section, though, is Alien Ant Farm. Whenever we listen to Alien Ant Farm we say to each other, 'That is the shit, that is awesome.'"

Josh: "They literally are the shit. People don't give them the credit that they deserve. They're awesome. Ridiculous!"

Sandy: "For my dream rhythm section, I'd like to play with Questlove. I'd love to look round and see Questlove with this big afro and tiny kit."

Josh: "How dare you! You choose the one drummer with more followers than me on Twitter. You know how I feel about this!"

Don't… Turn down a gig

Sandy: "Take every gig. Someone said to me once to take every single gig you're offered for two years. I did and it was awesome. If you can take every gig and you're not losing money by doing it, then I would say to do that. There are opportunities out there. We've both been to auditions where we've not got the gigs and that's fine. The right gig is out there for you."

Do... Add your own flavour

Josh: "We start the tour playing exactly as we rehearsed but we add in a few licks. By the end of the tour it's a completely different show. We don't overkill it, but if there's a space to be filled we fill it."

Sandy: "I think that's nice, to bring your own flavour. That way you know it's real musicians playing, otherwise you could just press play on a CD."

Josh: "With gigs like these, there are hundreds of people who want to be doing them. So it can be cut throat. If you're not doing it efficiently then you're gone and they'll get someone that will. You need to be on top of your game and suited to that gig better than the next person. As easy as it's given to you, it can be easily taken away. No one is untouchable."