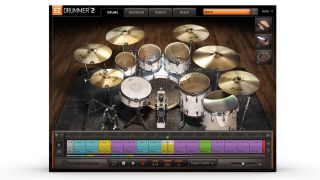 Toontrack describes EZdrummer 2 as a "breakthrough in drum production software".

MUSIKMESSE 2014: Toontrack's Ezdrummer 2 has been a big hit with musicians who want a simple way of creating high-quality rhythm tracks for their productions, so it comes as no surprise that the company has now announced version 2.

Said to be a completely new program, this brings new features for songwriting, a new user interface, a remodelled audio engine, a new mixer with effects chains, two new sound libraries and a selection of percussion sounds.

Toontrack has also updated its range of EZX expansion libraries for use with EZdrummer 2. Each one now has new effects chains and optimised graphics.

You can find out more about EZdrummer 2 on the Toontrack website. It'll be available on 6 May at a list price of £115/$179/€139. Upgrades will cost £65/$99/€79. Anyone who buys the original EZdrummer between now and then will be eligible for a free upgrade and get the EZdrummer's Pop/Rock kit, which won't be in version 2.