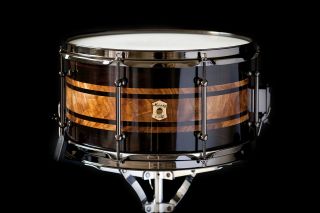 The drum features over 72 different sections of wood, skillfully glued and machined to a 10mm thickness with 1.5mm re-rings. It is then sanded, shellac-ed, buffed and varnished to an inch of its life before being topped and tailed with Evans G2 and Hazy 300 heads supplied by dD Drums in Falkirk.

The lucky owner of this new percussive work of art is Fraser West from one of Scottish band Skerryvore.

Fraser has also been named as Murray Drums first official endorsee. He dropped into dD Drums in Falkirk last week to pick up his new snare drum from the man himself and to give it a bit of a whack before setting off on a Highlands and Islands tour of Scotland.