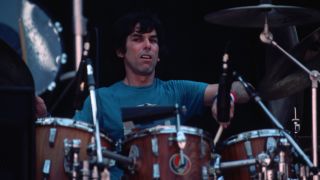 Have you ever wanted a bit of drum art created by a legendary drummer to adorn your wall with? Well now you may get the chance. Mickey Hart of the Grateful Dead has teamed up with Scenefour, a visual art team from Los Angeles, to create a collection of works that translate rhythms to the canvas.

The collection, which has been named 'Drum KI', will involve Mickey performing with light-up drumsticks and hand motions that will then be captured with time-lapse cameras. Not much has been given away yet on what this will actually look like but judging from Scenefour's previous work with drummers such as Steve Smith and Jose Pasillas of Incubus it looks like it's going to be worth checking out.

"These pieces were made with primal energy," says Mickey about 'Drum KI'. "I have brought spirit into form, from rhythm to light."

Scenefour will be trying something new out with Mickey this time as well. In addition to the drum kit a similar method will be used to create art will other percussion instruments such the djembe, congas and also some of Mickey's own creations. These include an instrument called the beam and also one called the Beast, a huge steel drum that saw action with the Grateful Dead. Each of these artworks will be limited edition and signed by Mickey himself.

To find out more about the collection check out MickeyHartArtwork.com to get a pre-release look at 'Drum KI'. The entire collection will be revealed to the public on the 2 July 2013.