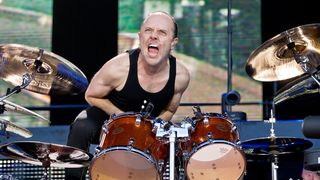 Can Lars Ulrich pick up the Golden Cowbell in the next Drum-Off? (Image credit: Daniel Karmann/dpa/Corbis)

The dust has barely settled on last month's Drum-Off between film funnyman Will Ferrell and Red Hot Chili Peppers drumming star Chad Smith - Ferrell emerged victorious over Smith, who later said he "was robbed." But now a new drum star wants to get in on the action.

Last week, in an interview with Spin magazine, Ferrell and Smith indicated that they would be up for another drum war, only this time they wanted a three-way death match and they put out the challenge to another one of their doppelgangers - Metallica's drum master Lars Ulrich.

And guess what? He accepted. Ulrich released the following statement to Spin:

It was a little lonely on the sidelines during the first drum-off, given the somewhat forced nature of the lookalike element between Chad Smith and Will Ferrell, when I'm TRULY the one carrying that dead-ringer gene around! As for any further drum-offs, I'm sure that with a bit of practice, I could give Chad a run for his money. But Will? That's a whole different story. He rules the "bad-ass drummer universe." I mean, you're talking about a guy who's so next level, actually, so beyond next level, that he may just be completely unreachable! That said, I'm definitely up for the challenge…Bring it on!!!

In their first Drum-Off, Ferrell raised money for the Cancer For College while Smith supported the Little Kids Rock charity. Now word yet as to which organization Ulrich will be battling for.