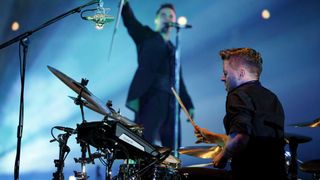 Live with Robbie Williams at the 02

Hello Readers, I thought it was about time I said 'hi' and updated you all on my year so far.

The O2 shows with Robbie Williams went so well it took me at least until after Christmas to come down from the huge buzz. The crowd, the band, Robbie himself all did so well and made it such a special moment.

I spent New Years Eve in LA and had a nice few weeks in the sun. Then out of the blue came the Girls Aloud UK tour. I cut my break short and flew back for the start of a long rehearsal period. This was to be the last tour for the Girls and a big one as it was their Greatest Hits Tour too. I was thrilled to be asked and thoroughly enjoyed the play. It was a great workout with a really great band.

(Above) My set-up for the Girls Aloud 10 Tour

I've been in and out of the studio a good bit too. I did a lovely session at Abbey Road for Zenomania who are making Amelia Lily's new record. Amelia also opened for Girls Aloud on the tour.

I've also had the pleasure of recording tracks for Rufus Wainwright, Robbie Williams, Mika, Florrie and Gary Barlow over the last few months.

(Above) Tracking at Kensal Town Studios.

I flew back to LA straight after the Girls tour to start recording James Blunt's new record with Producer Tom Rothrock. It was great to be working with Tom again as it's been a good five years since we made the last Blunt record All of the Lost Souls.

We tracked at Sunset Sound, a great old studio with bags of history. I can't wait to hear the outcome.

(Above) Tim Rothrock and myself taking a moment…

A good family holiday for a few weeks in the Caribbean to recharge, then I'll be straight back into the studio for a week before rehearsing with Robbie Williams for his 'Take The Crown' stadium tour.

I'll do my best to share some good moments with you all on my journey. It's hard enough taking it all in myself!