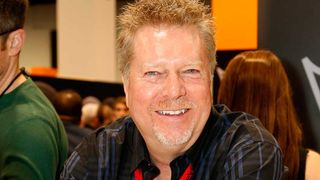 We asked groove machine JR Robinson, whose metronomic pop grooves for Rufus, Michael Jackson and more, defined the '80s pop sound, what 'groove' means to him. Here he gives us his definition of groove, and runs down his favourite groove drummers and the tracks that they made feel so good.

"Groove is a word that I use frequently. It's a word that is my way of life. As a little boy, my mother Helen always instilled in me the concept of "swing". This word "swing" begat "groove". I always use the analogy of a woman walking. She has a certain "swing" to her walk. My concept is the same about groove. You make people move and it is grooving!

"The obvious drummers that are on my list: Alex Van Halen, Hot For Teacher. I cannot imagine playing that song every night -yikes!!! John Bonham, 'Kashmir' and most of Zep. He conveyed "swing" in eighth-note straight grooves - simply amazing! Jeff Porcaro: Rosanna - he cleaned up Purdie's shuffle; Got To Be Real, Cheryl Lynn; I Keep Forgetting, Michael McDonald. Jeff was always spot on and extremely precise with his definition, whether it be a simple eighth-note shuffle from Boz Scaggs 'Lido' or a complicated Toto song."

Al Jackson, Jr - Hold On, I'm Coming, Sam & Dave; Midnight Hour, Wilson Pickett. I've always emulated Al with his groove. His eighth-note freight train concept was never derailed. Roger Hawkins, Chain Of Fools by Aretha Franklin, and Mustang Sally by Wilson Pickett. I love Roger's off-beat eighth-note bass drum pattern. I'll Take You There, Staple Singers. This is one of the funkiest grooves of all time. His use of crossstick ghostnotes and the bass drum patterns is one of a kind.

"Philly Joe Jones: Milestones with Miles Davis, and Tenor Madness with Sonny Rollins. Philly is on my list because his groove will never be equalled. The way he drove the band with just a ride cymbal was unrivalled.

James 'Diamond' Williams, Love Roller Coaster and Fire by Ohio Players. They were one of the great groups to come out of Dayton, Ohio. James set the bar higher than anybody on these songs. Groove is the key.

Robbie McIntosh, Cut The Cake and School Boy Crush with the Average White Band. Robbie was a big influence on my grooves. When I listen to AWB I smile. If I'm in a club, ALL are on the dance floor.

Earl Palmer - OMG! His list is sick… I Hear You Knockin' by Smiley Lewis, Earl nails the 12/8 groove better than anybody. Lover's Concerto, The Supremes. He is a HIT machine. Dead Man's Curve, Jan & Dean. We all listened to these surf songs and copied what Earl had created.

"And since we are talking groove, there's me: Ain't Nobody, Rufus and Chaka Khan; Change The World, Eric Clapton, Lose Yourself To Dance, Daft Punk; Higher Love, Steve Winwood; Don't Stop 'Til You Get Enough and Rock With You, Michael Jackson.

"In closing, groove cannot be ignored or forgotten. Groove is everywhere, like the air. Hell, my washing machine grooves. The key for drummers is to groove your entire career. "