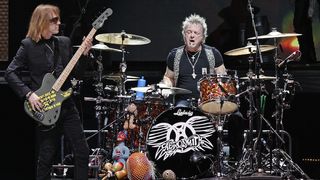 Follow-up to Music From Another Dimension seems unlikely (Image credit: A. Patel/Corbis)

Aerosmith drummer Joey Kramer seems doubtful over whether the band will ever make another album.

Speaking to Ultimate Classic Rock, Kramer admitted that the disappointing sales and critical reaction that greeted 2012's Music From Another Dimension may have put the band off from recording another record.

He said: "There's really no money per se to be made on records. We used to make a lot of money on records. Now all of our money is made on touring. Artistically, it would be fun to make another record and it would be a beautiful thing if we can put it together. But to what avail, I don't know. There's almost no reason to do it, you know, judging from the last one and how it went over."

"Music now is so disposable. It's so, like, 'Okay, here it is and five minutes later there's something else.' We're not the Justin Biebers and the Nicki Minajs of the world, so unfortunately, records don't make sense."

Aerosmith return to the UK to headline Download Festival in June.