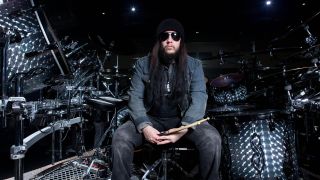 When Joey Jordison parted ways with Slipknot back in 2013, both camps were notably silent about the reason for his exit, citing "personal reasons" as the motive behind the split.

Now, Jordison has opened up about what these personal reasons could have been. While accepting an award at the Metal Hammer Golden Gods, he revealed a crippling disease left him unable to play drums at the end of his tenure with the Iowa metallers.

"Towards the end of my career in Slipknot, I got really, really sick with a horrible disease called transverse myelitis," he disclosed. "I lost my legs; I couldn't play any more.

"It's the hardest thing I've ever done in my life, more than fucking anything. To people with multiple sclerosis, transverse myelitis, or anything like that, I am living proof that you can fucking beat that shit!"

Jordison is now back with a new band, VIMIC, whose debut album is set to land later this year via Roadrunner Records. Look out for more from Joey on MusicRadar soon.