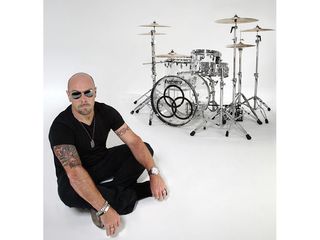 Out of one band, into another?

Drummer Jason Bonham revealed this past Friday morning (August 22) on a Detroit radio station that he is leaving Foreigner at the end of this month.

\With this news, again the question arises: Will there be a full-fledged Led Zeppelin tour soon?

In the interview, Bonham, who was born in England and now lives in Florida, gave no clear indication. But he did say this: "I've been over [to England] a couple of times. I've been working with Jimmy [Page] and John Paul [Jones] and trying to do just do some new material and some writing. I don't know what it will be, but it will be something."

Read into that what you will.

As for his tenure in Foreigner, Bonham said, "My time with is coming to an end. This is the first time I've talked about it. I leave at the end of this month so, I mean, I'm looking forward to taking some time out to be with the family really. Since I moved to America I've been on the road, so my first priority is to go and watch my kids grow up, because they've grown up way to fast in the last four years."

No word on who will replace Bonham in Foreigner.