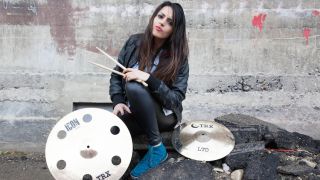 The Hit Like A Girl contest is back and now open.

The event, which showcases the premier talent of the female drum world, launched on 1 March, with contestants having until 8 April to get their entries in.

Those wishing to follow in the footsteps of past Hit Like A Girl winner Val Sepulvedua (pictured above)can do so by filming a clip of themselves behind the kit. They then must upload the video to YouTube and register at www.hitlikeagirlcontest.com. Videos can be of entrants performing their own compositions, drum covers or they can play along with the royalty-free backing tracks found on the competition's website.

The competition is made up of two age categories, under 18 and 18 and over. From these groups, an online vote will take place in order to find the top ten competitors in each category. The judges will also pick a series of weekly winners. These 20 lucky drummers will also progress to the grand final. Fan voting opens on 10 April and closes on 22 April. The grand final winners will be announced on 7 May.

Prize packs are yet to be announced, but in past years winners have walked away with an incredible array of swag worth a staggering $20,000!

For more information head over to www.hitlikeagirlcontest.com and keep an eye on Musicradar.