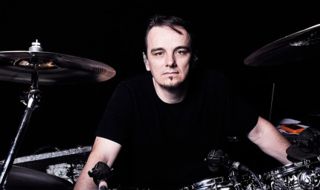 DRUM EXPO 2013: When asked who their favourite British drummer is, we're sure a great many would say Gavin Harrison - just check out the Greatest Drum Beat of the Millenia polland you'll find his name in there with Porcupine Tree's Bonnie The Cat.

Respected for his instantly recognisable sound, precise yet soulful playing, and huge swathes of musicality, Gavin inspires with every hit of his sticks. To celebrate Drum Expo 2013, we invited the prog master to discuss practise, sound and his career highlights so far...

How did you get started as a drummer and how did you become a professional player?

"I started playing when I was six years old because my dad was a professional trumpet player and who played a little bit of drums. Of course I tried to play the trumpet but it was just too hard. The drums felt natural to me because I was well co-ordinated as a kid. I wouldn't say it was easy but it felt more natural playing the drums.

"I really loved music, it was a big part of our family life. I wanted to play a musical instrument. The drums kind of chose me, I suppose. I had lessons when I was ten or 11 years old, learnt how to read and hold the sticks properly. When I was 16, through a friend of my father's I got a job so I left school and turned professional."

What is your approach to practice?

"I've always been pretty motivated to practise because I enjoy it. Whether it's some tortuous slow tempo co-ordination exercise that's destroying your head or whether it's jamming along to favourite records, I can always find a balance that I would be happy with. You do get addicted to it. I don't think I will ever reach a point in my life when I think I don't need to practise or I can't think of something to practise. You're either not thinking hard enough or not listening hard enough.

"I've been kicking around a few years now and over the years it's really easy to look back, listen to recordings or practise tapes and see how much I've improved. It can be quite exciting. Something to always work on is timing. And of course that is thing that makes the biggest difference when it comes to playing with other musicians. The only thing they are interested in is if you have got good time and make the music feel good."

Who has been your favourite person to play with so far?

"Someone called Lewis Taylor. I think it's the first and possibly the only time I've played with someone where I was actually a fan. When we got on stage the first night, we're talking about playing in front of 50 people in a club in London. He called out the first song and I thought 'Oh yes, I love this one. I can't wait to play it.' I really had a massive buzz. The other people I've played with I can't say I've been a devoted fan or listened to their music in my car for pleasure. I think Lewis Taylor was the first and so far the only person I really was a fan of."

You've played on some incredible tracks in your time. Which ones are you most proud of?

"At the time, I've been pleased with lots of things that I did and probably listened to them years later and thought 'I could play that better'. I guess the Sound of Muzak [from In Absentia, Porcupine Tree] came out very well. Ironically, I didn't even come up with the drum part - that was something already programmed on the drum machine. I added some parts and nuances to it, but the basic bass drum and snare drum stuff was already written when I heard the song."

You're well known for your stand-out drum sound. What's your approach?

"Over the years I've had lots of drums and lots of skins and lots of equipment. In the end the sound comes from you. It's a very personal thing the way you hit the drum. Having said that, I do spend a lot of time and care and attention on the way I tune the drums and the way I mic the drums. It's a long learning process and one that evolves. I'm always changing my ideas about the way I tune the drums or I might mic or mix the drums - there are lots of options - but I've got a sound that I like and it's in my head and I'm trying to pull that sound out through these drums."

Your sound is recognisable on any record. What advice would you give other drummers to achieve that kind of 'recognisability'?

How do you ensure you sound as good on stage as you do in the practice room?

"Put a lot of trust in your sound engineer. With Porcupine Tree we've had the same sound engineer, Ian Bond, for 13 years. I have a lot of discussions with Ian about which mics we should use and where they should sit. He's got a lot of things working against him, ie the room and possibly a PA that doesn't sound very good to start with. You may not even have the same desk every night.

"In later tours we brought our own PA and mixing desk but even then we were struggling with the room and changing acoustics. Some rooms just have bad acoustic properties. They weren't built for sound. Wembley arena wasn't built for sound - it's an ice rink. I play pretty much the same way if I was in the studio, and often the microphones are the same or similar, so I try to make it as good as I can to give Ian the best chance he can making a mix."

Looking back, was there any moment where you thought, 'I can finally make a living from this'?

"I'm still waiting for that moment! I think it would be a mistake to take up the drums or any musical instrument thinking you are going to make a living at it. I wanted to do that and of course in the earlier ten years or more of my career it was barely a living. I played as much as I could. Whatever I was offered, I didn't turn anything down.

"Having skills, being able to read and things were quite helpful, but I had massive amount of times out of employment - I don't look at it as out of work. To me playing the drums is a full time job. I get up in the morning and I play the drums. Some days I go out and make money doing that, other days I stay at home and practise. I don't think of it as 'Wow, God I'm unemployed' because there's so much of that."