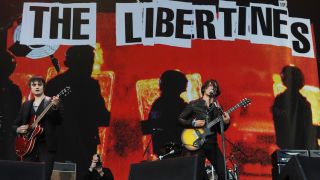 Earlier this month The Libertines announced that they will reform for a huge headlining slot at Hyde Park this summer.

News of the gig, which takes place on 5 July, was met with calls that the revered indie rockers were doing it for the cash, adding some filthy lucre to their coffers (well, they did support the Sex Pistols at their 2002 reunion show, after all).

But, drummer Gary Powell tells Rhythm that there's much more to Hyde Park (and the since announced warm-up gig in Glasgow) than the money.

"The Libertines reunion was something that was always on the cards for whatever reason," he says.

"The reports that it is all purely for financial gain are greatly over exaggerated. Of course there is an element fortune with the financial gains being made - but it would be hard to do this if it were purely for that reason. I have enough going on in my life and a busy enough schedule to keep me going minus this show. I do howeverstill love playing this music. It has a purer interpretation and dynamic than anything else I have ever played and is all so emotionally driven that it is hard not to be taken on a journey of discovery by the music. Lest we forget, I still love the guys in the band!"

Powell adds that with 5 July looming plenty of work ahead remains for the band.

"My preparation will mainly consist of going to the gym and playing a lot prior to getting in the studio with the band. This will also give me the time to construct the show as I see it, giving us all time and food for thought with reference to the overall show design."

The drummer goes on to say that fans can expect to see a similar set-up when it comes to his kit.

And that's not all Powell has coming up. He adds: "I have recently stared work with Paul 'THE PSM' Stanley of Gorillaz.We are revamping the London Guns project and making it hell of a lot more electronic and definitely heavier."